Cherine rocks out at UCLA fest 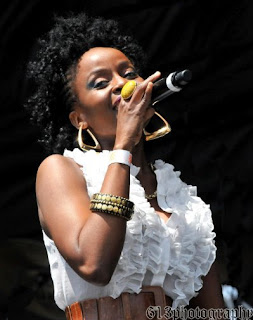 SOUL QUEEN: Cherine Anderson gives her all at the 2009 UCLA Jazz & Reggae Fest

LOS – Cherine Anderson has the work ethic and sense of focus that is a rarity for someone so young in the entertainment business. If there is a female Jamaican singer gaining respect from worldwide audiences on the strength of her talent and showmanship, Cherine Anderson's name would be found among the top of that list. After rocking , to a sold-out crowd on Sunday night with Spearhead, Santigold, Soljah and South African band BLK JKS, was on a pre-dawn flight headed for with only enough time to get to her hotel, change clothes and head straight for the UCLA stage. If the dancehall soulstress was feeling fatigued, it surely didn't show to the music loving crowd, as she delivered a fierce set which left her fans wanting more.

Cherine performed several songs from her newly released CD "The Introduction-Dubstyle EP". Assertive and powerful, she encouraged her female fans with her latest hit "Talk if Yuh Talking", and found favor among the West Indians on favorites like "Kingston State of Mind" and "Good Love". It was, however, "Movie Star" that caused the loudest uproar from the audience. An excited middle-aged fan jumped the barricade to dance with on the classic and even started singing to her, much to the delight of the crowd. She introduced new tracks like "How Many More", and the crowd cheered as she came off the stage into the audience and escorted a fan on stage with her. After she reminded the fans that the day was about them, she handed the young man her mic.

The young man serenaded Cherine with the Bob Marley classic "Turn Your Lights Down Low", before singing 's mega hit "Coming Over Tonight" to her. With time left for one song she delivered a new tune "20 to Life". Cherine herself received a welcome surprise with her finale, as a group of females in the front joined her in singing the unreleased song word for word.


Anderson wrapped her Southern California shows delivering a short but entertaining set on Tuesday night at The Mint to help raise funds for a radio station (KPFK 97FM) charity before wrapping up the week with shows in Savannah, Georgia and upstate New York. She is scheduled to perform at the annual Sierra Nevada World Music Festival on two stages on Saturday, June 20th. She will play a live set on Saturday afternoon and head to the dancehall with Stone Love in the midnight hours.