FILM OF THE WEEK: The Taking of Pelham 123 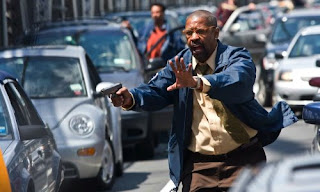 MAN ON FIRE: Denzel Washington gets into character in Pelham 1 2 3

The Taking of Pelham 123 (Sony Pictures)

DENZEL Washington may be ‘undergoing the effects of time’ these days but, thankfully, his magnetic on-screen presence has not waned an iota. In fact, I think he is improving as his evolution intensifies. With his latest role in the thriller The Taking of Pelham 123 as a veteran subway dispatcher his performance both tugs at your heart strings and engages the mind. Alongside fellow seasoned silver screen star John Travolta, Washington delivers to the satisfaction of viewers, while breathing life into a character that played by any other actor could have turned out uninteresting and clichéd.

Directed by kinetic action addict Tony Scott with an adapted screenplay by Brian Helgeland, The Taking of Pelham 123 is an engrossing, fast-paced but balanced remake of the 1974 original that puts front and centre the physical and internal conflicts one man must overcome in a bid to help save lives. Washington stars as Walter Garber, whose normal day on the job as a subway dispatcher is ruined when one of the passenger trains he oversees is hijacked by a crazy and angry criminal mastermind named Ryder (Travolta) and his gang of hooligans, who demand a high ransom for the release of passengers to be paid in an hour.

With the clock ticking away and the cops unable to make a breakthrough, Garber has to pull on his experience and knowledge of the city’s rail system and simple common sense to outsmart Ryder and restore calm to the bustling city. The on-screen pairing of Washington and Travolta provides some humorous moments and their regular negotiation chats recall that Christian Bale/Heath Ledger match-up in The Dark Knight. Travolta brings manic energy to the role, even though his portrayal does come across as campy at times.

James Gandolfini takes a departure from his Tony Soprano mobster characterizations to tackle the part of the mayor, who is out to protect his citizenry at all costs. Never mind that he does a lousy job any way. After all, he’s no Rudy Giuliani. Scott, who directed in 2006’s Déjà Vu and 2004’s Man on Fire) employs his signature quick-action film-making style to offer a wild and sizzling ride. He lets the action play out without much interference and this works to the benefit of the picture as things move along quite stylishly, with equal parts intrigue and tension.

Absorbing and action-packed, The Taking of Pelham 123 is quite possibly the most successful collaborative effort between Scott and Washington. The informed pairing of Washington and Travolta is equally worth your time and the price of admission.