MOVIE REVIEW: Drag Me To Hell 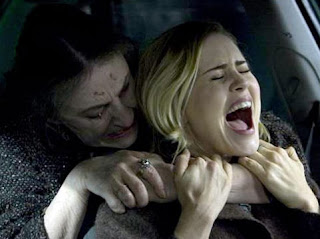 'HELL' ON EARTH: Alison Lohman and Lorna Raver in Drag Me To Hell

Drag Me To Hell (Universal Pictures)

HORROR films in fall into one of two categories: freakish delight or throw-away mess. After an eternal bombardment of trashy horror tales (with the exception of The Uninvited) since the start of the year, Drag Me To Hell has come to offer respite, however brief. Directed by Sam Raimi (Spider Man), Drag Me To Hell is a jolting and genuinely frightening yet entertaining experience that will make you think twice about pissing off mean old women.

Alison Lohman (loved, loved her in White Oleander) stars as Christine Brown, a pleasant bank loans officer vying for a promotion. So when an old woman comes into the bank seeking an extension on her loan payment to save her house, Christine rejects her pleas in a bid to prove to her boss that she can make the “tough decisions”. Wrong move. Choosing ambition over generosity is never wise. The embarrassed old woman (a diabolical geriatric in disguise) casts a spell on Christine, making her life a living hell. Tormented and filled with regret, Christine later tries to reverse her decision but it’s too late. Her poor boyfriend (a predictably caring Justin Long) is at a loss on how to help when her world turns into a demonic playground. They seek out the services of a shaman, who helps make some sense of what has befallen poor Christine.

Unlike the recent debacle that was A Haunting In Connecticut, Drag me To Hell goes for simple, effective scares and valuable old-school suspense techniques; an efficient combination. The story is thin and the performances average at best, plus there is little chemistry between Lohman and Long but the movie makes up for its shortcomings with great intensity and creepy, unexpected spooks. Oscar-nominated actress Adriana Barraza (who mesmerized in 2006’s ) makes a surprise appearance as a spirit woman/demon slayer in a crucial scene.

While I am a bit disappointed with the ending, it takes very little from the overall success of the flick, which at times combined the horrific with the comedic. Raimi enjoys a fun return to filmmaking with this smart and surprisingly satisfactory diabolical romp.