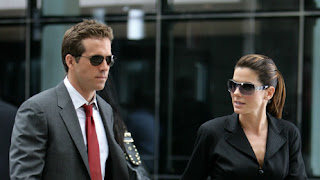 'CRAZY' IN LOVE: Ryan Reynolds and Sandra Bullock in The Proposal

THE Proposal is a fresh, funny and light-hearted romantic comedy that sails smoothly via the effortless chemistry shared by lead stars Sandra Bullock and Ryan Reynolds and a storyline that is as amusing and appealing as it is unforgettable and believable. Like most good romantic comedies, it offers a worth-your-time examination of matters of the heart while reminding you of the possibility of finding love when you least expect it and in the most unlikely of places and situations.

Bullock (who got good comedy exercise with such hit vehicles as Miss Congeniality) stars as Margaret Tate, the uptight editor-in-chief at a New York-based publishing house. Her job is her life and she devilishly overworks and intimidates her subordinates, including her hardworking secretary/assistant Andrew (Ryan Reynolds), who is hungry for a promotion. When immigration authorities threaten to deport Margaret back to her native , she blackmails Andrew into feigning a relationship (engagement and impending marriage) to keep her in the country.

With no choice but to play along (and convincingly too), Andrew takes Margaret to meet his folks in a small sea-side town in Alaska, where we encounter his sweet mother (Mary Steenburgen), adorable grandma (Betty White) and demanding father (Craig T. Nelson). But can the “crazy-in-love” couple keep up the charade over the course of their visit, or will they crack under the pressure? It doesn’t help them either that a suspicious immigration officer (Denis O’Hare) is breathing down their necks.

The Proposal has a talented and competent ensemble cast that delivers, not to mention a gifted screenwriter (Pete Chiarelli) whose witty lines easily roll off the tongues of the actors. Reynolds (known for starring turns in such flicks as Definitely, Maybe) is flawless and with Bullock (I forgive her for accepting that horrible role in The Lake House) he forms an attractive, likeable and impressive on-screen pair. Overall, The Proposal provides a refreshing romantic adventure, bolstered by strong acting, fine writing and emotional heft.