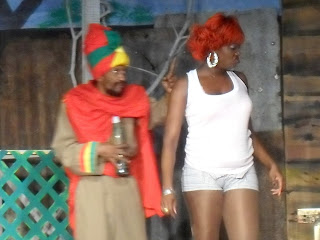 FANTASY and reality, magic and superstition, good and evil clash in playwright Andrew Roach’s latest theatrical offering, Ras Genie, a likeable and modestly entertaining production that benefits from good writing and decent performances. However, it falls short of the consistency necessary to keep it afloat. Commendably directed by Dahlia Harris, the play introduces us to Wingie (Carlene Taylor) and her best friend Chin (Natalee Cole), both exotic dancers and unapologetic gold-diggers, who live at a tenement yard shared by a pushover pastor (Rowan Byfield) and owned by a no-nonsense landlord named Mr. Stennett (Dean Martin).

One day Wingie encounters a strange bottle which when opened liberates a foul-smelling Rastafarian genie (Peter Heslop), who becomes her mystical source of information on the colourful folks living in the yard. Additionally, she is the only one who can see and hear him. Before long, ‘bangarang’ ensues with the landlord and the pastor intent on ridding the yard of the new visitor.

Ras Genie engages when the focus is on the chemistry shared by Heslop and Taylor, who turn out to be a likeable duo. Roach, who impressed with his award-winning script for Strength of a Woman, manages to create some funny out-of-the-ordinary situations for his characters through his writing. But this time around, the overall results are mixed, with several scenes being overly outlandish. The acting styles are predictable and the action onstage is sporadically funny but the set design and lighting get high marks.

Overall, Ras Genie is a serviceable and intermittently funny comedy made satisfactorily enjoyable by the comical antics of its lead characters and an amusing story, though it falls short of winning us over completely.