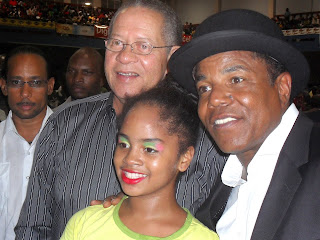 Last Thursday night at Mello Go Roun’, inside the National Arena, the loudest applause was reserved for music legend Tito Jackson, who attended the concert with a large entourage as guest of Prime Minister Bruce Golding and culture minister Olivia Grange.Sharply attired in full black, including a sleek felt hat, was a dead ringer for his father, Joe.

After enjoying the show’s first half, Jackson (now 55), accompanied by Golding and members of the security forces, went backstage during the 15-minute intermission to greet some of the young performers and to, presumably, collect the gizzarda he was promised by MC Nadean Rawlins. He returned for photo ops and to sign autographs before returning to his seat to enjoy the second half.

TALLAWAH managed to chit-chat with Jackson, a Rock & Roll Hall of Famer, briefly to hear about his visit to ‘Jamrock’ for Reggae Sumfest and his Marley memories. 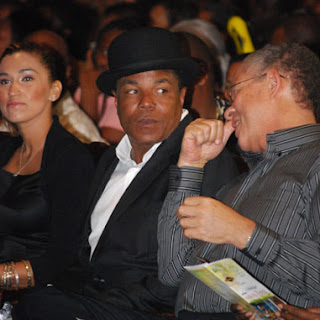 On attending Reggae Sumfest 2009 and receiving the Lifetime Achievement Award on behalf of his famous family:

“It was great to see all the entertainers, and see all the hard effort they put into their performances. To receive the award felt great. It was a nice gesture. has always been supportive of me and my family. I am really grateful.”

On being in during his time of bereavement (on June 25, 2009 Tito's brother, Michael suffered a cardiac arrest at his home. Later that day, he was pronounced dead at age 50)

“[’ is a place of relaxation absolutely. So being here feels good. It has helped.”

On the negativity surrounding Michael Jackson’s life, death and legacy:

“It’s not an easy thing to deal with.”

“He was a great person. He made us feel very welcome at that time." 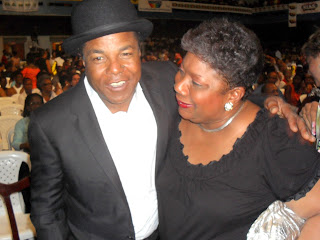