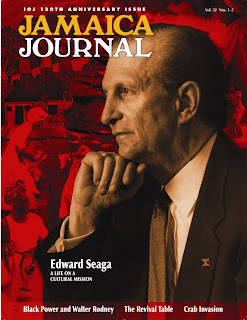 The much celebrated Jamaica Journal magazine, the flagship publication of the Institute of Jamaica (IOJ) has launched its 130th anniversary issue, which features former Jamaican Prime Minister Edward Seaga as its cover subject.

Edited by Kim Robinson, the new special issue features a diverse range of reviews, essays and articles, notably Edward Seaga’s “A Life on a Cultural Mission,” his account of his work in Jamaican culture, including launching the Jamaica Journal as a medium of documenting the culture. University lecturer Clinton Hutton offers “The Revival Table: Feasting with the Ancestors and Spirits”; historian Verene Shepherd writes “Sir Anthony Musgrave and the , while Professor Rupert Lewis contributes “Jamaica Black Power and Walter Rodney in 1968.”

The Jamaica Journal, one of the ’s leading cultural publications, was first published in 1967. As an authoritative source on Jamaican heritage, contemporary culture and natural environment, the magazine’s coverage of a wide range of topics - history, literature, science and the arts commands the interest of the general reader. Over the years, the publication has featured icons of our cultural heritage such as Louise Bennett-Coverley, Ranny Williams, Olive Lewin and Bob Marley.

Currently, the IOJ publishes two issues per year. Articles for the Jamaica Journal are peer-reviewed by an academic editorial team, a criterion for academic publications. Consequently, it is a useful resource for students and researchers and this characteristic explains its presence in academic institutions and libraries locally, regionally and internationally.