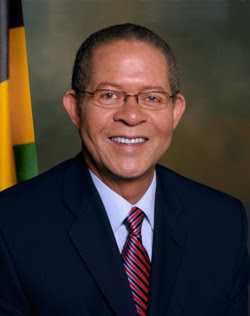 My fellow Jamaicans, here at home and wherever in the world you may be. We mark the 47th, like every other country, is feeling the effects of the global economic crisis. Our economy has come under severe pressure and I know that many Jamaicans are experiencing additional hardship in their daily lives.

It is a testing time for us, a test of the strength of our nation and the resilience of our people to withstand the pressures, weather the storm and position ourselves for recovery. We have come through tough times before and is an appropriate time to remind ourselves of the road we have travelled, the challenges we have had to face and the difficulties we have overcome.

Those who were born before Independence, especially our senior citizens, will have personal recollections of the long, tedious road to Independence, the struggles of the 1930s to secure the basic rights of our people including the right to vote and the right of workers to representation and collective bargaining, the transition to self government in the 1950s and the attainment of Independence in 1962.

For them, the achievement of was a cause that inspired, a dream that they were called to pursue, hopes that they believed would be fulfilled. Embedded in that dream and those hopes was a nation that would be at peace with itself and the rest of the world, a nation of vast, untapped opportunities that would be opened up to create prosperity and a better life for all the people of .

We often bemoan the fact that so much of that dream and so many of those hopes remain unfulfilled; that in these 47 years of Independence there have been too many missteps, too many lost opportunities, too many failures and disappointments. Yet, we must not allow ourselves to be disillusioned or de-motivated for the journey is not over and the race can still be won. We will pull ourselves through this difficult stretch and we have it within us to make up lost ground and get back in the race.

We must not allow our failures to overshadow our achievements for to do so would be to dishonour the work and sacrifices of the many great Jamaican men and women who have helped to build our nation and create the institutions that have held us together even in the toughest of times.

In the next few days, we will bid our final farewell to an icon of that struggle, Lady Bustamante. Her passing is a reminder that we did not reach where we are without the toil and sacrifices of those who have gone before. It is not difficult to identify the areas of the greatest deficit in building on our independence:

Firstly - the slow pace of economic development and our inability to provide jobs and a decent standard of living for all our people; Secondly - the weaknesses in our education system that deprive too many of our children of a good education that can make them productive and an asset to society;

Thirdly - the lack of respect for the rights of others and the failure of our legal and justice system to adequately protect and enforce those rights.

These are the priorities that must be tackled if the dream and hopes of are to be fulfilled. And they must be tackled with the same evangelical zeal with which we pursued the attainment of . They may not have the same glamour or evoke the same passion as the quest for political independence. They may not pump the same adrenalin as when we were struggling against a colonial power. But their essentiality is no less commanding and their fulfilment no less important. Indeed, they are the unfinished part of the campaign.

47 years ago, we took firmly in our own hands the tools of nation building. We accepted full responsibility for the building of that nation. We must accept responsibility for our failures and the mistakes we have made, for not having worked hard enough and fast enough. These are setbacks that we must overcome, ground that we must make up. There were setbacks, too, in the struggle for independence but we overcame those and achieved that goal.

Despite the setbacks and the harshness of the times, we can overcome. The fruits of are within our reach even if they are not immediately within our grasp. Let us rekindle the spirit of . Let us recommit ourselves to fulfilling the dream and hopes of independence. Our nation needs us now as much as it ever did before. Let us rise to the occasion. Let us answer the call.