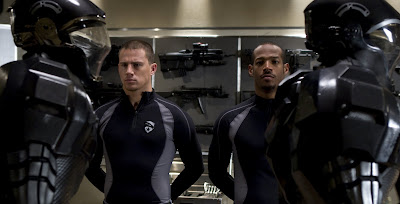 READY FOR DUTY: Channing Tatum and Marlon Wayans star in G.I. Joe: Rise of The Cobra

Overflowing with high-octane action, sizzling big-budget visual effects, and a respectable storyline that binds it all together, G.I. Joe: Rise of The Cobra is the first real action adventure flick of summer 2009. Far more entertaining and appropriately rendered than Transformers 2, more jolting and edge-of-your-seat fun than the latest Harry Potter release, G.I. Joe delivers from beginning to end, thoroughly holding your attention, despite the absence of twists and the predictability of certain scenes. Still, it is appealing and hugely enjoyable.

G.I. Joe: Rise of The Cobra revolves around a team of young agents who form part of an international co-ed force of operatives (known as G.I. Joe) who use high-tech equipment to fight global terror. On their latest assignment they battle Cobra, a terrorist organization headed by an evil Scottish arms dealer named McCullen/Destro (Christopher Eccleston).

From the vast Egyptian desert to deep below the polar ice caps, the elite squad pulls on the latest in next-generation spy and military equipment to fight the corrupt arms dealer and the growing threat of his mysterious Cobra organization to prevent them from plunging the world into destruction and chaos via a unique and deadly explosive substance.

A competent cast, led by Channing Tatum (as the strong-willed Duke) and Dennis Quaid (General Hawk), breathe full-bodied life into a bunch of characters that otherwise could have been one-dimensional and uninteresting. Sienna Miller (the sultry femme fatale Anna) and Marlon Wayans (the fun-loving Ripcord) bring fierce energy to the screen.

Rounding out the cast are 500 Days of Summer star Joseph Gordon-Levitt (as Rex) and Rachel Nichols as the gorgeous and brainy Shana. Surprisingly, under the direction of Stephen Sommers (Van Helsing) the bulk of the cast mesmerizes, displaying maturity, effortless dexterity, and winning chemistry.

Overall, G.I. Joe: Rise of The Cobra is the kind of plush summer action flick worth repeated trips to the cinema. It achieves what Transformers: Revenge of the Fallen didn’t — absorbing entertainment with the right balance of gripping action and spirited storytelling. At the same time, it also succeeds with its adrenaline-inducing sequences, commendable performances, and Sommers’ direction that whips all the elements into an engaging whole.

In a summer of mixed cinematic offerings, G.I. Joe, though not great on depth and substance, is a standout that might provide the perfect wrap-up to the blockbuster season. It is visceral and pure escapist fun.

Posted by TALLAWAH Magazine (tallawahmagazine@gmail.com) at 12:37 am