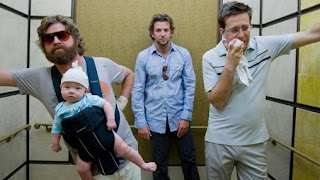 THREE MEN AND A BABY: The cast of The Hangover 'hangs' out

Friendship and brotherhood are put to the test in The Hangover, a super-fun road-trip comedy that is surprisingly well-written and thoroughly hilarious. Directed by Todd Phillips (Borat, Road Trip) with a screenplay by Jon Lucas and Scott Moore III, the movie offers appropriate and light-hearted entertainment for those seeking a flick drenched in the spirit of adventure and laced with big laughs.

To celebrate his last few hours as a single man, Doug (Justin Bartha) and his three groomsmen head to for some wild, unfiltered fun. But when it’s time to return home to attend the wedding, none of the guys can recall what transpired the night before and, oh yeah, they can’t find Doug. All they find when they wake up in the morning are a crying baby, a large man-eating tiger in their hotel bathroom and more questions than their heads can contain.

Phillips is familiar with this territory of film-making, the road-trip movie, and successfully combines all the right elements for one hilarious package. Despite the occasional hiccup, he allows the comedic scenarios to play out without much interference, giving much of the film a free-flowing atmosphere and unhinged energy. Bartha, Bradley Cooper (Wedding Crashers) as Phil; Ed Helms as Stu and Zach Galifianakis as Alan all seem pull on their innate ‘what happens in Vegas...” fantasies in bringing life to their freakishly twisted and weirdly believable characters.

For the most part, The Hangover traverses the conventional road-trip route but with far more favourable results than many of its predecessors. Goofy without being gross while packed with ferocious humour, mischief, mania and raw masculine energy, The Hangover is a ‘guy flick’ that will certainly have the girls cracking up too.

Posted by TALLAWAH Magazine (tallawahmagazine@gmail.com) at 5:01 am