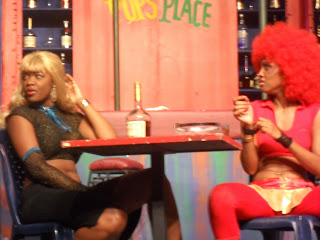 At a key moment in the play Diana, the title character angrily tells her boyfriend, “I am a dancer, not a prostitute.” She makes this ‘revelation’ during a pivotal scene in the two-act play, and for the first time her respect for her line of her work is made supremely clear to viewers in the audience.

It’s the same fierce loyalty she brings to her relationship with her man at home, though she’s not holding on to much. Her construction boyfriend Doggie (Courtney Wilson) is insanely jealous and insecure; the rent for their place of residence is several months in arrears; the cable company has cut their service due to non-payment and the furniture is being re-possessed piece by piece. But Diana has stayed because she loves her man.

In crafting the basic set-up for the play - arguably one of his finest - playwright Patrick Brown skillfully tosses these little details into the mix as the action unfolds. Boasting all the elements for a thoroughly entertaining production, Diana is a lofty tale of desire, danger, devotion and desperation, which soars on Brown’s smart and informed writing and the strong performances of the cast, particularly Camille Davis in the title role.

As the action plays out under Trevor Nairne’s apt direction we not only meet Diana and Doggie. We are also introduced to Diana’s close friend Cher (played with vim and conviction by Sakina), a deaf-mute exotic dancer, and Pops (the always commendable Glen Campbell), who runs Pop’s Place, the bar and go-go club where Diana and ‘perform’ nightly. 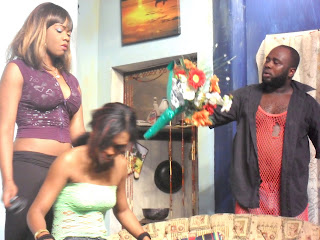 Wherever music, alcohol and dancing women mix, trouble can’t be too far away. For Diana and Doggie, it comes in the form of a dapper but dangerous big-spender named Candyman (a reliable Chris Hutchinson), who will stop at nothing for “one night with Diana”. And when Doggie foolishly gets himself in a predicament, it seems Candyman will finally get his way.

The cast has appealing chemistry and the performers display a mature understanding of their characters and their struggles, which makes the production all the more easy to follow and hugely enjoyable. Though Diana, a re-working of Brown’s Dirty Diana, has its outrageous moments, it is also punctuated with tastefully humorous scenes and sobering scenarios in equal measure. Well-lit and strongly acted, it is one of the most satisfying offerings to emerge from the Jambiz camp.