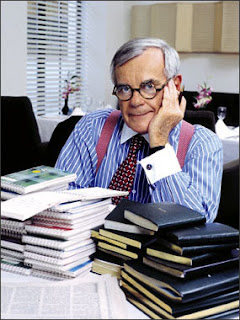 THE DEPARTED: Dominick Dunne passes at 83

Dominick Dunne, the former Hollywood producer, diarist and best-selling author known for his in-depth Vanity Fair essays on the courtroom travails of the rich and famous, died Wednesday in after a long battle with cancer. Dunne, who told stories of shocking crimes among high society folks through his magazine articles and best-selling novels such as The Two Mrs. Grenvilles, was 83. Dunne's son, actor-director Griffin Dunne, said in a statement that his father had been battling bladder cancer.

Affectionately called 'Nick' by his friends, Dunne was putting the finishing touches on his final novel, which he planned to call Too Much Money, when his health took a turn for the worse. He flew to earlier this month for another round of stem cell treatments at the same Bavarian clinic where the late Farrah Fawcett was treated. He was hospitalized upon his return to , and then sent home.

Dunne, who lived in , was also beginning to write his memoirs and, until close to the end of his life, he posted messages on his website commenting on events in his life and thanking his fans for their support. As a correspondent for Vanity Fair, Dunne was a fixture at some of the most famous trials of the century – Claus von Bulow, William Kennedy Smith, the Menendez brothers, Michael Skakel, Phil Spector and O.J. Simpson.

Vanity Fair editor-in-chief Graydon Carter praised Dunne as an exceptional reporter who proved as fascinating as the people he wrote about. "Anyone who remembers the sight of O.J. Simpson trying on the famous glove probably remembers a bespectacled Dunne, resplendent in his trademark Turnbull & Asser monogrammed shirt, on the court bench behind him," Carter wrote in a statement. "It is fair to say that the halls of Vanity Fair will be lonelier without him and that, indeed, we will not see his like anytime soon, if ever again."

Posted by TALLAWAH Magazine (tallawahmagazine@gmail.com) at 11:52 am