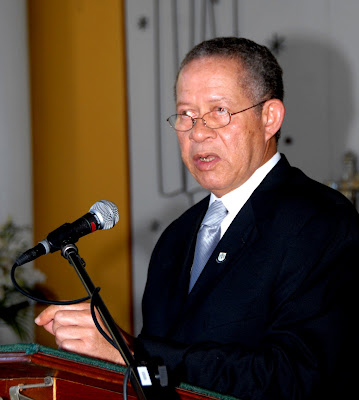 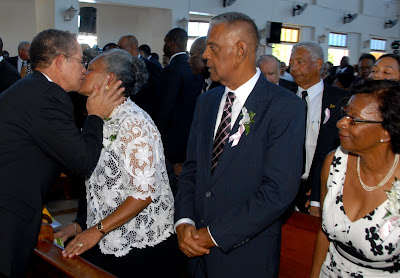 The nation is today united in mourning the passing of one of the finest daughters of our land.

If we were to identify the ideal qualities of womanhood it would represent the mould from which Gladys Maud Bustamante was made. If Jamaica needed a role model of loyalty, selflessness and complete devotion to not only the man she adored but the cause for which he struggled and the people for whom he fought, we needed to look no further than Lady B.

Lady Bustamante’s life and experiences are, in so many ways, the story of Jamaica as it made the transition from colonialism to Independence and nation building.

Born in the rural district of Parson Reid in Westmoreland, journeying to Kingston to complete her education and find employment, she found herself at a point in our history when the rights which, today, we take for granted were the privilege of an inheriting few, when the majority of Jamaicans occupied space that had no horizon and when wages were offered as an act of benevolence, not a just reward for labour rendered.

She was struck by the exploitation she saw, the prejudice she encountered. She could have simply empathized, helped where she could while getting on with her own life amidst the challenges of the times. But fate would not have it that way.

In her published memoirs, Lady B tells of the day she first blessed eyes on Sir Alexander Bustamante on Duke Street on her way to church in 1934. She would see him again and again because Bustamante, who had just returned to Jamaica after a long sojourn abroad, could habitually be found on Duke Street on a Sunday morning engaging people in animated discussions. At times he would greet her with a smile and a cheerful word. At other times he was too engaged in conversation to notice her passing by but she recalled the powerful impression he had on her.

That is not surprising. There is hardly anyone who has ever met Bustamante, that tall, commanding marvel of a man who has not been struck by the fact that this was no ordinary man.

Lady B would see more of him when she got a temporary job at Arlington House on East Queen Street where politicians and businessmen including Bustamante would gather to engage in robust discussions about conditions in Jamaica.

Her temporary job came to an end and for all intent and purposes she could have gone her way and Bustamante his. But, again, fate would not have it that way. Two years later, in 1936, a Mrs. Prestwidge whom she knew and who knew Bustamante told her that he needed someone to “keep his books, take notes, type letters and run his office”. She applied for the job. Bustamante made short shrift of the interview. It didn’t take him long to decide that this was the person he was looking for. She got the job and on March 9th 1936, a day after her 24th birthday, began an association with Bustamante that would last for the rest of his lifetime, put her on the frontline of Jamaica’s political struggles and become part of the Jamaican legend.

There began a relationship that had many facets. It placed Lady B at the heart of that epic struggle against the colonial power in the 1930s to secure the rights of workers. It placed her in the vanguard of the development of our modern political system which resulted in the elections of 1944 when, for the first time, the ordinary people had the right to vote. It placed her at centre stage in the attainment of independence in 1962.

Through it all she was there in every struggle that had to be waged, in every fight that had to be fought. She was at Bustamante’s side in every triumph that was won and in every despair that had to be overcome. She never wavered in her support, never allowed her commitment to be questioned; she was never anything but steadfast in her loyalty.

She lived in the shadow of this great colossus but radiated so much light of her own. The cause of the workers was not just Bustamante’s cause in which she became involved and to which she gave so much support. She made it her own cause and assumed much of the administrative responsibilities for the union which was his power base. The enduring strength of the BITU and, indeed, the trade union movement owes as much to the work she did as it does to the leadership Bustamante gave.

Although Lady B was a tireless fighter, she was also a calming influence on Sir Alexander because, often, Sir Alexander needed to be calmed. Stories abound of the fear that gripped the heart when you were summoned by the ‘Chief’, especially if you had reason to suspect that he might have been angry over something you had said or done. Wise counsel dictated that you have a quiet word with Lady B before approaching the Chief and wait for Lady B to talk to the Chief before venturing forward yourself. She is still the only person who, if Sir Alexander decided on a course of action, could have persuaded him to think again.

An admirable facet of Lady B’s life was the absolute love and inseparability she shared with Sir Alexander, a love story, the stuff of which novels are written and films are made, in a word, our own Camelot. Yet, she laid no claim to aristocracy. She was the epitome of humility, a lady who walked with kings and queens and dozens of presidents and prime ministers, yet, never lost the common touch.

To those of us who grew up in the Party and the Union, she was like a mother and we had a sense that she was proud of us even though at times we came up short. In recent years she could no longer undertake public engagements. Despite her incapacity, she maintained the dignity and serenity that was the Lady B we knew. When I went to see her on her last birthday, she looked at me and squeezed my hand. She could not say a word. She didn’t need to say a word. That was enough. It said a lot and meant a lot.

Now, the end has come and she has faced her final curtain.

Today, we gather in a show of appreciation, a spirit of thanksgiving for the life of this great lady whom all Jamaica claims as its own. The boundless love she earned from the Jamaica people which she takes with her to her final rest is worth far more than all the honours we have bestowed on her.

Lady B, we thank God for guiding and protecting you through this journey of 97 years. We thank Him for the role he ordained you to play in the building of our nation. We thank Him for what you have meant to us during your lifetime and what your life will continue to mean to us for all times.

A grateful nation that you served so well now bids its fond farewell.