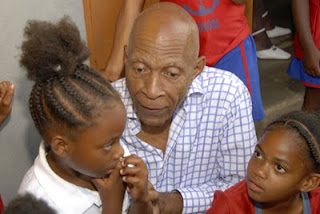 A LEGEND PASSES: Trevor Rhone (centre) with some youngsters

Last week in Parliament, Prime Minister Bruce Golding led tributes and condolences on the passing of playwright Trevor Rhone who died on September 15.

Golding said of that “He was one of the most accomplished, most outstanding of our playwrights and writers. Even in recent times he did a one man show in which he spoke about Bellas Gate. He has won many awards including the Musgrave Gold Medal, and overseas he was only recently selected for the National Black Theatre Living Legend Award in the . A giant of Jamaican theatre and somebody who has made a signal contribution to our cultural development.”

The Prime Minister also noted ’s close connection with his own district, Bellas Gate in St Catherine; and he noted that his own father, Tacius Golding, was also from Bellas Gate. Mr. Golding expressed his condolences to Mr. Rhone’s widow, Camille, and his children.

Rhone began his theatre career as a teacher after a three year stint at , an English drama school. He was part of the renaissance of Jamaican theatre in the early 1970s and participated in a group called Theatre '77, which established The Barn, a small theatre in to stage local performances. The vision of the group that came together in 1965 was that in 12 years, by 1977, there would be professional theatre in .

Posted by TALLAWAH Magazine (tallawahmagazine@gmail.com) at 10:17 am