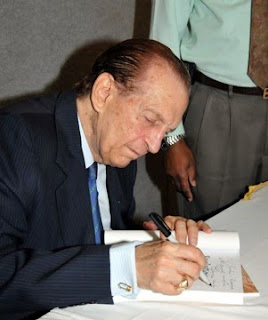 RECORDING HISTORY: Edward Seaga signs a copy of his book at the launch on Wednesday
Last Wednesday evening, former Jamaican prime minister Edward Seaga unveiled his two new books, which address aspects of Jamaican culture and the country's part in the 1983 US-led invasion of Grenada.

'Revelations: Beyond Political Boundaries' and 'The Grenada Intervention: The Inside Story' were launched at a function at the Hilton Hotel in Kingston, attended by a slew of present and former parliamentarians, scholars and dignitaries.

The books, published by the UWI Press, were written as part of Mr. Seaga's obligations as a distinguished fellow at the University of the West Indies, Mona Campus.

Revelations: Beyond Political Boundaries is a collection of 27 addresses given by Mr. Seaga since taking up the distinguished position at the UWI in 2005, after retiring from active politics. In the book, he draws on his experiences as a politician to address such topics as culture, education, finance and the constitution.

Mr. Seaga's highly anticipated autobiography will be released in two volumes in 2010. 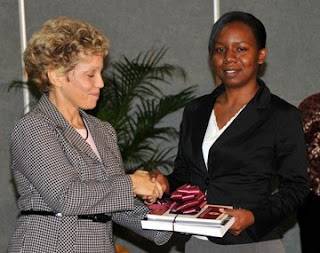 HANDING OVER: Carla Seaga (left) presents copies of her husband's new books to Nicole Brown of the National Library of Jamaica 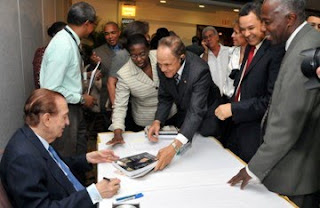 BOOK SIGNING: Edward Seaga gets ready to autograph copies of his new books at the launch