FILM SNAPSHOT: Tyler Perry's I Can Do Bad All By Myself 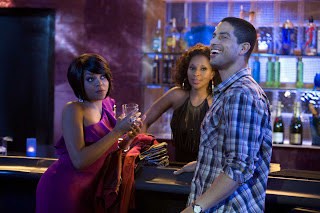 GOOD OR BAD: Taraji P. Henson (left), Mary J. Blige and Adam Rodriguez in I Can Do Bad

I Can Do Bad All By Myself (Lionsgate Pictures)

Steeped in writer and director Tyler Perry’s signature blend of family, struggle, hope and redemption, I Can Do Bad All By Myself is a warm-hearted and emotionally resonant comedy-drama that manages to entertain and inspire despite its shortcomings.

Taraji P. Henson (The Curious Case of Benjamin Button) is in fine form as April, a booze-loving night club singer who must care for her sister’s troubled kids following the sudden death of their grandmother. Help comes in the form of a Mexican immigrant named Sandino (Adam Rodriguez) who April agrees to take in as a tenant. But when April’s selfishness threatens to wreck everything, things take a turn for the worse. What’s more, her boyfriend, a married man named Randy (Brian White) is trouble.

Perry’s no-nonsense Madea accounts for most of the movie’s amusing moments (including her ‘Biblical butchery’ in one pivotal and side-splitting scene). Rounding out the competent cast of supporting players are musical powerhouses Mary J. Blige (as bartender Tanya), Gladys Knight (as kind-hearted Miss Wilma) and Marvin Winans (as Pastor Brian).

As with most Tyler Perry productions, the narrative occasionally gets bogged down by an over-zealous objective to provide inspirational food for the soul. Still, Perry’s unapologetic examination of how spirituality and a commitment to doing the right thing can empower and transform is admirable and continues to pack cinema seats.

In short, I Can Do Bad All By Myself mixes message, hilarity and rousing music quite effectively into a satisfactory whole, constructed around the power of love to uplift and change and the premise that we all have redeeming qualities.