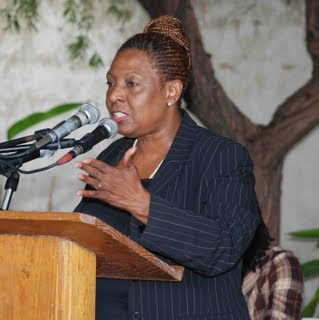 “There should be no community without a space of engagement. It may be an open field for sports and other forms of recreation or a building for meditation, discussion and negotiation.”

Minister of Youth, Sports and Culture, Olivia ‘Babsy’ Grange made the declaration as she addressed the recent opening of the second day of the 2009 International Workshop of Local Government Administrators taking place at the Jamaica Conference Centre in .

Grange said there should be no capital or town without a space where the people can engage in the cultural offerings of the community and experience the cultural expression for which the community is known. She said such space “may be entertainment centres, theatres, galleries, museums, libraries, green spaces, and are important for the transfer of knowledge that is inherent to any discussion on intangible heritage.”

Grange added that all business plans for the establishment of housing solutions should be considered inappropriate or incomplete if they did not include spaces for recreation and communal engagement.

“This is fundamental to the promotion of quality of life for all. Spaces for recreation and leisure must not be seen as value-added or luxury or as competing with roads and hospitals but as integral to the creation of wholesome and healthy communities,” the Minister said.

Grange said she was pleased that local government authorities were engaged in a discourse on intangible heritage as it the local authority that very often had the responsibility for the construction, maintenance or facilitation of the community spaces. She said that local authorities should understand their responsibility to promote the intangible heritage without which communities could become weakened and vulnerable.

“In this kind vulnerability, the potential of communities become lost in the mayhem of anti-social behaviour and violence, usually based in ignorance of the traditional knowledge systems that first created the communities.

The culture minister urged local authorities to work closely with culture ministries and agencies for “the sustainable prosperity of our communities.


Posted by TALLAWAH Magazine (tallawahmagazine@gmail.com) at 11:06 am