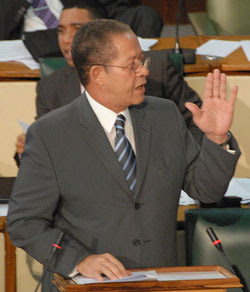 Prime Minister Bruce Golding says that next Tuesday when he addresses Parliament, the nation will hear about the changes that will have to be made to give the country a chance to survive and grow.

“We will be proposing the direction to take the country through this crisis and beyond into a period where we can start to grow and develop again,” Golding explained.

Speaking at his seventh town hall meeting, held in May Pen, Clarendon on Wednesday, September 23, Golding further noted that in order for the country to move ahead, it cannot just deal with the crisis of today and hope that tomorrow takes care of itself. Changes for survival and growth must be made.

The prime minister also disclosed that he has been working with a technical team for the last two days and that he will be going to Cabinet the first Monday in October to seek a mandate to pursue the necessary changes.