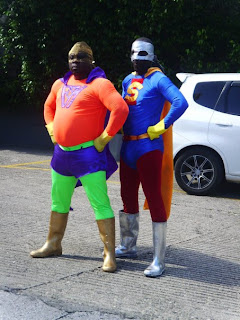 SUPER COMICS: Ity (right) and Fancy Cat get into character

What's better than live, witty comedy delivered to the comfort of your living room? Well, that's the goal of the presenters and the producers of The Ity & Fancy Cat Show, which recently got a 'makeover'. The show's format now boasts stand-up comedy routines and hilarious skits with appearances by a variety of well-known stars, including actor Donald 'Iceman' Anderson and Rishille Bellamy. Comedian Tony 'Paleface' Hendriks makes a cameo appearance in episode 5 airing this weekend.

Now in its second season, the show features writing by Ian 'Ity' & Alton 'Fancy Cat' Hardware, Owen 'Blakka' Ellis and Tony Hendriks, and expert technical direction and editing provided by Carlington Silburn and his team from 4Reel Productions. Live links are recorded at the Courtleigh Auditorium in New Kingston with music provided by FAME 95FM.

Season 2 premiered on Friday, August 7, with a promise from the production team to deliver a product that is fresh and relevant in content, innovative and adventurous in form and hot in entertainment value. The show's first season in 2008 was relatively successful; the Teenage Observer voted the show the best comedy programme on Jamaican television.

The Ity & Fancy Cat Show airs Fridays at 9:30pm on TV J with repeats on Tuesdays at 10:00 pm. The show is produced by Ellis International, and sponsors include Digicel and Courts Jamaica.