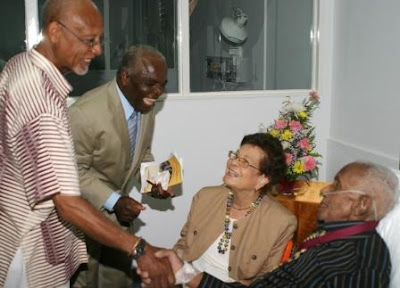 WARM GREETINGS: Wycliffe Bennett shares a light moment with Professor Barry Chevannes (left) and Vivian Crawford at the University Hospital in St Andrew last August. By his side is his wife Dr. Hazel Bennett.

Another beloved icon of the arts in Jamaica is no longer with us. Wycliffe Bennett, a pioneering organiser of the Nation Festival of the Arts and former general manager of the once-active Jamaica Broadcasting Commission (JBC) has died. Bennett, who was ailing for some time, succumbed to his illness at the University Hospital of the West Indies in St Andrew on Monday. He was 87.

Throughout his life, he received many honours for his work, including the National Order of Distinction (Commander Class), a Silver Musgrave Medal and the Centenary Medal from the Institute of Jamaica (IOJ). Earlier this year, he was presented with the Actor Boy Lifetime Achievement Award. On August 28, he received the Gold Musgrave Medal from the IOJ for his outstanding contribution to the arts, at a special presentation at the University Hospital, attended by Governor General Sir Patrick Allen.

Bennett was also about to launch his new book, The Jamaican Theatre in 20th Century: Highlights of the Performing Arts, from the UWI Mona Press, which he co-authored with his wife, eduactor and historian Dr. Hazel Bennett. Mr. Bennett is survived by Dr. Bennett, his daughter, Dr. Carlene Bennett, and his son, Wycliffe Lincoln Bennett.

"[Bennett] will be remembered for his dedication to the training of young people in the areas of voice and speech. Wycliffe Bennett dedicated almost 60 years of his life as an outstanding producer, director and trainer in the theatre, radio, and film industry, always striving for excellence in every area of the arts. His commitment to excellence was recently recognized with the awarding of the Gold Musgrave Medal, the latest addition to his many other awards and citations acquired over the years." - Prime Minister Bruce Golding

"He has seen a good deal of what he defended, projected and advocated come to pass. He is a great institution builder." - Rex Nettleford, Vice-Chancellor Emeritus, UWI


"Mr. Bennett’s name will always be associated with the CPTC as the main studio was re-named in his honour after its rededication in 2007. Mr. Bennett you were our father, friend, teacher, mentor, director and the ultimate producer. Rest well." - The board, management and staff of the CPTC

"Mr. Bennett's passing removes from us an outstanding and deeply patriotic Jamaican who has made an indelible mark on the cultural and communication landscape of the country. He was a great leader in broadcasting and the theatre arts and a very notable trainer in a whole range of areas, including elocution and public speaking." - Hopeton Dunn, chairman of the Broadcasting Commission

"Over the years he has done some magnificent productions, influencing the lives of several Jamaicans, young and old alike. He has been involved in training a host of persons and also trained me as a broadcaster. For me, he was like a father figure." - Fae Ellington, actress and broadcaster