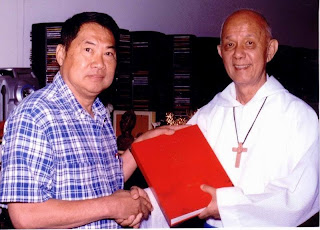 TEACHER: Father HoLung (centre) shares his vast knowledge with young missionaries.
For nearly 30 years, hundreds of poor Jamaican families living in the capital city have found a faithful friend in Father Richard HoLung, the self-proclaimed “ghetto priest” whose tireless work as head of Missionaries of the Poor in some of the battered communities in Kingston has provided many with hope and saving grace.
Today, Missionaries of the Poor caters to nearly 4,000 poor, sick or abandoned men, women and children, providing food, clothing and shelter for many at the six homes the Catholic missionaries operate in Kingston. They have even taken their work and ministry to countries in Africa and Asia.

Even at 70, Father HoLung shows little signs of slowing down, carrying out his duties with refinement and charm, in spite of faltering health. Currently, he is spearheading the establishment of a new home, among other projects, and overseeing the staging of a new musical production – Jam Reggae Opera – at the National Arena in Kingston.

TALLAWAH recently chatted with the people’s priest to hear about finding joy and inspiration in his work, new engagements for Missionaries of the Poor and cultivating fresh leadership in the brotherhood.

TALLAWAH: Congrats on the electrifying new Jam Reggae Opera. What has the response been like from people, and why would you encourage Jamaican families to come out and see it?
Father HoLung: The response has been pretty amazing. I think they really love it. A man who saw the production talked to me afterwards and said that he really liked how everything comes so much alive on stage. He found it really intense and entertaining. There’s a sense of freshness and power to it.

TALLAWAH: I read that the production is based on your award-winning 2008 musical Yes, which copped a handful of Actor Boy awards earlier this year. Why did you decide to make a ‘reggae opera’ out of it? What provided the inspiration? Father HoLung: I felt that, for instance, the richness of the music [in Yes] was not achieved last year, and the emotion I felt in the writing was not fulfilled. So I said let me make it into a real drama and the let the music be an expression of the powerful emotion.

TALLAWAH: On September 17, you celebrated your 70th birthday. What does such a milestone mean to you?
Father HoLung: (Laughs) I am a very happy person, and I am very joyful that the Lord has continued to lead me in the direction of working with the poor. Jamaica has always been the source of joy for me and others. And the music is purely a gift to bring joy to other people and to evangelize.

TALLAWAH: One of your latest projects, I understand, is the establishment of a new home called Holy Innocents at Heroes’ Circle in Kingston to benefit even more of Kingston’s sick and homeless.
Father HoLung: We are very happy about it. The drawings for the home are done and we are presently carrying out the survey. It’s an old building that we are developing. It is about 12,000 square feet, and construction work should start very shortly. We hope that it will really help the poor and ease some of the pressure off them. Of course, we do everything without cost to the poor.

TALLAWAH: What’s next in the pipeline for Missionaries of the Poor?
Father HoLung: We are presently in Kenya and Uganda where we take of the homeless. And we are also in India, where we look after leprosy victims and street children. In Haiti, we presently have two homes, and we hope to open another one there for children with HIV. We also want to do the same in Kenya. God has been good to us, and we just want to keep doing his work across the world.

TALLAWAH: Indeed. You’ve been involved in this kind of selfless ministry as head of Missionaries of the Poor for decades. Who will succeed you after you’ve relinquished the leadership?
Father HoLung: I’m working on leadership within the brotherhood, and so far we have been blessed with some really good men, some good brothers, who will be able to lead and take charge. Right now, leadership training is one of the priorities here.

Jam Reggae Opera is currently on a limited run at the National Arena in Kingston. For more info on the work of Father HoLung and Missionaries of the Poor, including how you can help their cause, visit Missionariesofthepoor.org