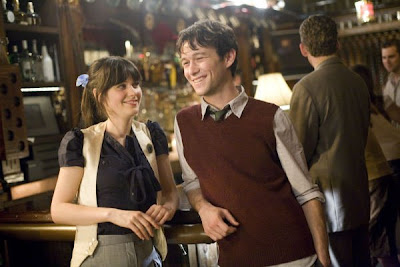 If you thought Juno was fresh and highly original, then you will want to make time for (500) Days of Summer, a thoroughly funny and clever romantic comedy that is as delightful and witty as it is inventive and strongly acted. It is one of those quirky indie films (in the tradition of Junebug, Juno and Away We Go) with the goods to charm your pants off, with its revealing and unwavering exploration of matters of the heart.

Evenly paced and packed with engaging dialogue, (500) Days of Summer introduces us to Tom (Joseph Gordon-Levitt), a good-natured young man, who makes a living composing greeting card messages. Unlucky in love most of his life, he one day meets a fresh-faced beauty with dark hair and deep eyes named Summer (Zooey Deschanel), the new girl at the office, who also happens to single. They bond over eccentric band music and their friendship soon moves from platonic to sexual.

But while Tom is seeking a solid and committed relationship, Summer wants to keep things casual, and she makes this clear from the outset. Tom, however, still wants to achieve something concrete with Summer. From happiness to heartbreak, the film outlines the course of their time together, flashing sporadically from the present to the past as their story unfolds. However, the events are easy to keep up with despite the frequent use of this flashback technique.

Director Marc Webb remarkably brings the vision of writers Scott Neustadter and Michael Weber to the screen, making the film more of a heartwarming story about love and despondency than another sappy love story of boy meets girl. What’s more, one young man’s quest to land a love supreme is made both exquisitely palpable and eerily relatable.

The pairing of Gordon-Levitt and Deschanel is perfect and the duo delivers terrific performances. Having seen Gordon-Levitt hold his own in grittier fare like Brick and The Lookout (and recently in G.I. Joe: Rise of the Cobra), (500) Days of Summer represents a refreshing departure for the rising star. Deschanel plays Summer with a splash of sugary sweetness and allure, making the character lovely and likeable. But while I am a huge fan of her work, it still confounds me that Deschanel accepted that thankless role in M. Night Shyamalan’s dreadful 2008 offering The Happening. I’m just saying.

In short, (500) Days of Summer is breezily entertaining and immensely satisfying, and serves as a tremendous vehicle for its two young leads. It is easily one of the best films of the year.