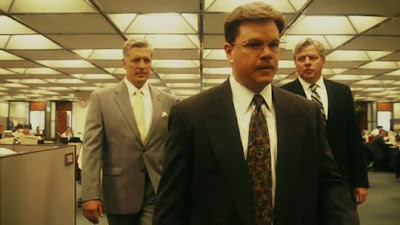 UNDERCOVER BROTHER: Matt Damon (centre) is a man on a mission in The Informant

The trademark of Oscar-winning director Steven Soderbergh is all over his latest film, The Informant, and in many respects, this generates mixed results. As with previous film projects like the Ocean’s trilogy and Erin Brockovich, The Informant takes a serious matter and punctuates it with wit, humour and satire. Honestly though, these days it’s all becoming a little too predictable with Soderbergh. There’s hardly any element of surprise to his work anymore. But at least his films are always watchable, and he stays clear of caricature.

Matt Damon, in a terrific, go-for-broke performance, stars as Mark Whitacre, a division president of a powerful corporate firm being investigated by the government for price-fixing with competitors. Whitacre agrees to assist the FBI in their probe by doing some agent-style work from inside the company, putting his career and family at risk, but with the hope of deriving some financial benefit, of course.

Whitacre soon gets the hang of it, even dubbing himself Agent 0014 (because he is twice as smart as James Bond, Agent 007.) Some hilarious voice-overs featuring Whitacre’s musings on everything from nature and animals to his boss’ blotchy skin provide some comical moments. Rounding out the cast are Scott Bakula as Agent Brian Shepherd, Joel McHale as Agent Bob Herndon and Melanie Lynsky as Whitacre’s loyal wife Ginger.

Watching The Informant, based on true events, you realize things won’t turn out too great in the end for Whitacre, but the process of arriving at the film’s conclusion is an occasionally engrossing affair. In lesser skilled hands than Soderbergh’s, the film might have stumbled into dreary, mind-numbing territory; however, buoyed by Damon’s stellar portrayal, The Informant offers a wonderful and witty examination of fraud, corporate whistle-blowing and mental disorder.