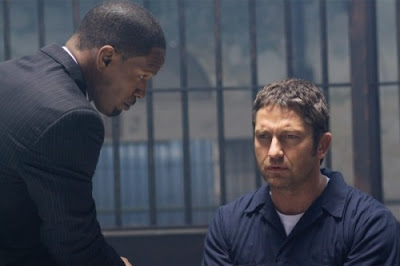 WHEN JUSTICE IS BLIND: Butler (right) and Foxx in Law Abiding Citizen

Law Abiding Citizen is a taut and gripping psychological thriller that, despite occasional lapses in storytelling and pacing, has enough moments of intrigue and suspense to satisfy viewers. The film also represents a terrific return to filmmaking for director F. Gary Gray (The Italian Job), whose first introduction to many was as the creative genius behind such award-winning music videos as TLC’s Waterfalls.

The film, which boldly examines themes of justice and vengeance, pitches Oscar winner Jamie Foxx (Ray) opposite Gerard Butler (300, The Phantom of the Opera) – both versatile actors in their own right. stars as Clyde Shelton, an upstanding family man whose wife and young daughter are brutally murdered during a nocturnal home invasion. barely survives the attack. An arrogant young attorney named Nick Rice (Foxx) is assigned to the case when the killers are caught.

In a move that will prove costly, Rice offers one of the killers a light sentence for testifying against his partner in crime, who is sentenced to death. Fast-forward a decade and the one that got away is hacked to pieces Saw style. After casually admitting to the murder, is imprisoned. Afterwards, he warns Rice that if the justice systems that failed his family is not fixed, key players who were involved in the murder case who die. At first, Rice dismisses ’s admonition, but when his warning starts coming to pass, Rice’s attitude changes. But how can a man engineer a series of killings and bring a city to its knees from behind prison walls?

As and Rice, respectively, and Foxx excel in their roles as Gray ratchets up the intensity. Particularly impressive are the methods employs in offing some of his targets (in one scene, a high-powered judge takes a bullet to the head through her cellphone.) Seasoned moviegoers might find some scenes in the latter half of the film predictable, but that takes very little away from the overall success of the picture.

By and large, the story builds to a powerful conclusion as the pieces of the puzzle and the various other elements fall into place. Clever and engrossing, Law Abiding Citizen is high-wire fun, a well-wrought and rigid suspense thriller.

Posted by TALLAWAH Magazine (tallawahmagazine@gmail.com) at 9:13 am