FROM MY DVDs: Life Is Hot In Cracktown 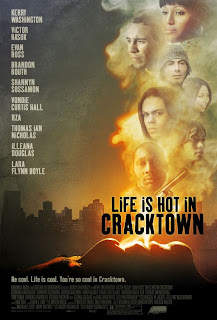 The gritty and devastating realities of life in downtrodden communities across the Life Is Hot In Cracktown, a powerful and emotionally involving film from writer/director Buddy Giovinazzo. are made easily accessible in

A smorgasbord of drugs, sex, murder, prostitution and poverty, race and class informs the captivating storytelling, made all the more appealing by the strong performances from an impressive roster of actors, which comprises Kerry Washington, Evan Ross and Vondie Curtis Hall, among others.

Against this backdrop, we are introduced to a fascinating array of multi-layered characters, each dealing with a particular crisis by which they are increasingly tormented as they strive to make life in the fictitious, crime-plagued community of Cracktown.

Among the film’s main characters are Romeo (Ross), the ruthless leader of a teenage gang that terrorizes residents; a transgendered prostitute named Marybeth () living with her overprotective boyfriend (Victor Rasuk); a young Latino store operator (Edoardo Ballerini) grappling with frequent break-ins and the demands of a family at home.

We also meet a young boy who must take care of his little sister after their drug-addicted mother and stepfather skip out. In the movie’s opening scene, a young girl is gang-raped by Romeo’s posse. The common thread that binds these people together is the resolve to survive in the face of the most extreme repression and hopelessness.

With nods to films like Tsotsi, Crash and City of , Life Is Hot In Cracktown is a vivid exploration of the conflicting forces and obstacles often attendant to the pursuit of one’s happiness. While Giovinazzo’s writing occasionally loses focus here, the courage of his characters to be true to themselves and survive in a hostile society is compelling.

Giovinazzo gets props for his candid illustration of life in certain quarters too often ignored by the mainstream. He does a highly commendable job at weaving together the different strands of the story and building suspense (particularly as the ending approaches) in crafting his film, a hard-hitting meditation on crime, class and community.