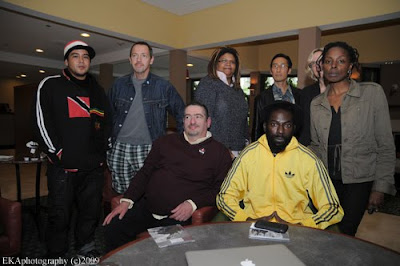 Embattled reggae and dancehall entertainer Buju Banton met with representatives from the Lesbian Gay Bisexual and Transgendered (LGBT) community in , on Monday, a move chosen to discuss the string of show cancellations Banton has been suffering in the lately. Banton has been a frequent target of gay rights protesters for his 1992 song "Boom Bye Bye," which the gay activists say glorifies murder and violence directed at gays.

According to San Francisco Weekly, before the dialogue, Banton's show at the Rock It Room in Sans Francisco scheduled for Monday night appeared in jeopardy of cancellation due to protest. After the face-to-face exchange, however, the LGBT activists not only agreed to let the show continue as planned, but expressed optimism about the possibility of further dialogue and action, toward a human rights agenda inclusive of both LBGT concerns and the reggae community.

In addition to Banton and his manager Tracii McGregor, present at the meeting, which took place at the Courtyard Hotel in Larskpur, were supervisors Bevan Dufty and Eric Mar, executive director Rebecca Rolfe, blogger Michael Petrelis and lesbian activist Andrea Shorter.

The LGBT activists, led by Petrelis and Shorter, voiced their concerns over homophobic lyrics and anti-gay violence in directly to Banton, and suggested various things he could do to promote human rights, such as a town hall meeting in .

Banton blamed colonialism and the Jamaican government for homophobic laws, denying he is a hate speech or murder music artist, as his critics have insisted. "Let's face the reality," Banton said. "Whatever is said in a positive light can't get out." On the topic of the controversial tune, he added, "I don't perform the song anymore. The reality is I've gone past that."

"You have a bad PR problem," Shorter told Banton, adding, "I'm not gonna get a medal for talking to you." She added, however, she was willing to try to forge ahead to figure out "what we can do together to fight against hate and violence in a way that is meaningful."

The meeting appeared to soothe tensions on both sides. At the end of the meeting, the participants posed for snapshots.

Posted by TALLAWAH Magazine (tallawahmagazine@gmail.com) at 10:57 am