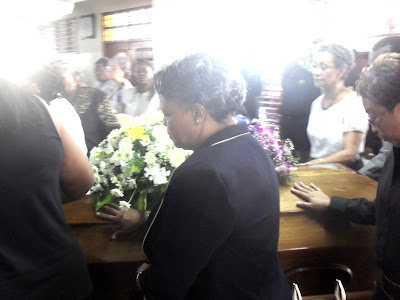 Somehow the funeral service to mark the passing of celebrated Jamaican playwright, actor and director Trevor Rhone would not have been complete without the solid input of his colleagues in the local theatre community, an arena helped revolutionize with his sterling contribution during his 69-year sojourn on Earth. Art was a major component of Trevor Rhone’s genetic make-up, an integral part of his journey.

Last Thursday, October 1, members of the arts and theatre community joined government and opposition officials, bereaved relatives and friends inside the packed St Luke’s Anglican Church in Cross Roads for the afternoon service to pay their final respects to the departed stalwart --- a man they loved and respected.

Cast members of ’s recently revived play Smile Orange served as ushers, decked out in their brightly coloured stage costumes, lining the walls at the back of the church and thoughtfully greeting persons as they entered the church. Members of the Jamaica Association of Dramatic Artists (JADA), attired in all black, acted as pall bearers. Among the mourners were former Prime Minister Portia Simpson-Miller, culture minister Olivia ‘Babsy’ Grange and former parliamentarian Aloun Assamba.

In her tribute, Grange called “a wonderful human being,” who was a lover of simplicity yet appreciated sophistication. “Through his plays and films, he provided us with laughter and occasion for reflection and meditation,” she said. “Trevor may be gone physically, but he’s here spiritually because he made such a profound contribution to Jamaican culture that will never be forgotten.”

As a master playwright, screenwriter and theatre director, Rhone added such plays as Old Story Time, Smile , School’s Out and the one-man spectacle Bellas Gate Boy to the The Harder They Come and Milk and Honey were also among his famous works.

Pioneering Jamaican actress Leonie Forbes, who starred in Milk and Honey, summed up Rhone’s contribution beautifully and perfectly during the remembrance, offering, “What he gave to was remarkable. What he has left is immeasurable.”

In offering words of comfort with the bereaved family, Bishop of Kingston, Reverend Robert Thompson thoughtfully shared, “Let us give God thanks for Trevor’s life. Take comfort in knowing that his life has now taken on a new beginning.” is succeeded by wife Camille, daughter Traci and sons Jonathan and Trevor Jr. 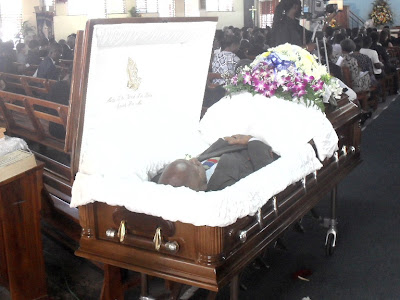 PEACE LIKE A RIVER: Trevor Rhone gets his final rest

Posted by TALLAWAH Magazine (tallawahmagazine@gmail.com) at 11:48 am