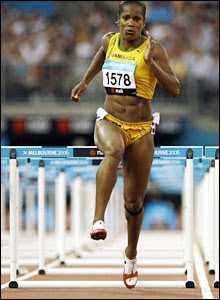 Sprint hurdler Brigitte Foster-Hylton has been named the 2009 winner of the Courtney Walsh Award for Excellence. The ceremony was held recently at the Jamaica Pegasus Hotel in New Kingston.

Foster-Hylton, 34, who won the gold medal in 100 metre hurdles finals at the Berlin World Championships in August, was given the nod over footballers Fabian Davis and Donovan Ricketts and cricketer Gareth Breese. The award includes a highly coveted crystal bowl and cash prize of $500,000.

"I just feel like it was worth waiting for and I'm satisfied. I will be encouraging young people to stick to their goals and dream big because they'll achieve whatever they put their minds to," Foster-Hylton told reporters after accepting the award. "It's an awesome honour to join the ranks of those giants of the sporting world who preceded me as the recipient of the Courtney Walsh Award, and this is the crowning moment for what has been a great season for me. In fact, it's the best season of my entire career," she added.