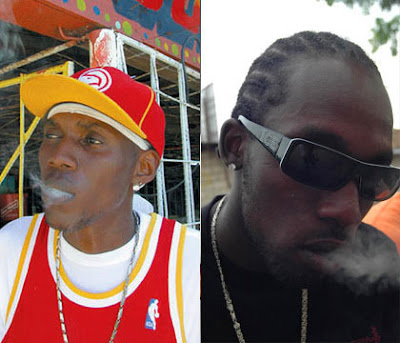 IS THIS A TRUCE? Vybz Kartel (left) and Mavado agree to lyrical peace

Minister with responsibility for information, , has emphasized government’s responsibility to intervene in the situation created by the Gully Gaza controversy which has resulted in tension between the fans of dancehall artistes Mavado and Vybz Kartel.

Minister Vaz along with Minister of Education, Andrew Holness, Security Minister Dwight Nelson, representatives of the Ministry of Youth, Culture and Sports, head of the Peace Management Initiative (PMI), Herro Blair,, head of the National Transformation Programme, Rev and others met at Jamaica House with dancehall artistes Mavado and Vybz Kartel on December 8.

Minister Vaz outlined several initiatives which were agreed on at this morning’s meeting, including the removal of Gaza/Gully graffiti, a peace concert and the recording of a duet between both feuding artistes, among others. Both dancehall artistes, Mavado and Vybz Kartel, have made it clear that they are no enemies and that their rivalry is just about the music.