STAR SPOTLIGHT: Bolt up for Time 'Person of the Year' 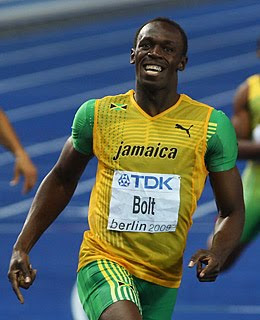 LEGEND IN TRAINING: Usain Bolt up for Time Person of the Year

Is Usain Bolt the Person of the Year? Time Magazine thinks so, but he needs your votes. The Jamaican-born World’s Fastest Human is among an esteemed list of news-making personalities being considered for the prestigious honour, to be voted on by the international public. Among the others are President Barack Obama, military commander in Afghanistan Stanley McChrystal, business tycoon Steve Jobs, the Somali Pirates and the Iran Protesters.

Here’s what the magazine had to say about Bolt’s chances:

Pro: At this year's World Championships, Bolt somehow topped his awe-inspiring performance at the Beijing Olympics. He ran the 100-m in 9.58 seconds and the 200-m in 19.19 seconds, breaking his own world records in each sprint and keeping track and field in the sports spotlight. In the wake of his latest achievements, scientists wondered if he'd pushed the limit of human athletic performance.

Con: Track and field is still essentially a fringe sport. Plus, given track's sordid steroid history, it's impossible for many observers not to wonder if performance-enhancing drugs had a role in his record-breaking dashes.

To cast your vote, visit Time.com