PIECES OF ME: Lessons from my first time... at 'STING' 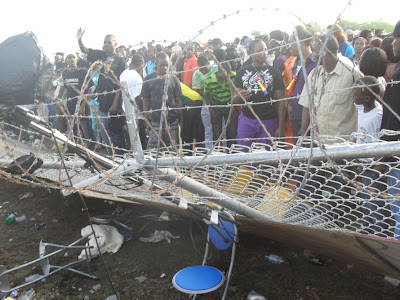 POP DOWN: Panic and stampede toppled the VIP barrier fence at Sting 2009

Evidence that I am getting stronger (and older) mentally, I finally worked up the courage to attend Sting. Perhaps my initial intention was to investigate the ‘mystique,’ debunk a few ‘myths’ associated with the popular event that is now 26 years old. Showing up at outdoor events attended by a multitude is not my thing. I’m more of an empty theatre house/movie auditorium kind of guy. But I admit that the myriad of Sting survival stories and unforgettable TV footage have intrigued me for years. It was time to get a first-hand experience. I would wear my best pair of running shoes and keep my guard up the entire time.

What a dud the whole thing turned out to be. Maybe 20 years ago Sting qualified as “the greatest one-night reggae-dancehall show on earth,” but looking back at the recent staging, there was nothing remotely incredible, let alone memorable, about it. Maybe with the exception of the gunshots that rang out at 7:40 am, resulting in a scary two-minute stampede that knocked down the barrier fence that separated VIPs from regular patrons. You should have seen me cowering under a wooden platform (used by a video camera crew) while chaos ensued around me. I chuckle now whenever the image flashes across my mind. 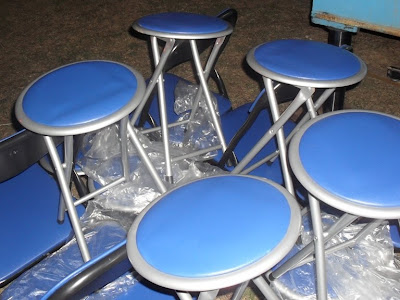 THE PRICE OF COMFORT: An ambitious vendor tried to sell me one of these mini-stools for $1500 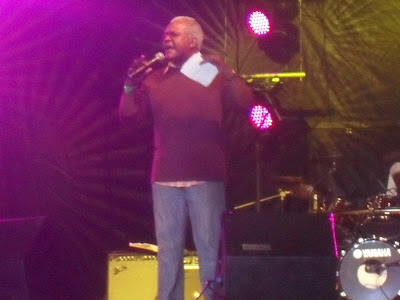 PREACHER MAN: Al Miller managed to deliver a few encouraging words and a prayer before being clapped off the stage

Every year, an estimated 10,000 Jamaicans (and scores of foreigners) flock to the Jamworld Entertainment Centre (in Portmore, Catherine) on Boxing Day to witness the happenings at Sting. Hardcore dancehall followers and unabashed party people raving and going wild till the early hours of the next day, then going home to crash. But many Jamaicans stay away due to the likelihood of disorder, violence and deejays-behaving-badly that overwhelmingly characterize the show’s reputation. It’s a risk many will simply not take.

Given the vast presence of uniformed officers positioned at strategic spots all over the large venue last Boxing Day, the last thing you’d expect to hear are shots being fired from within the crowd. Of the few rounds fired, however, none hit anybody, but that could not prevent the ensuing panic and stampede. Eventually, the crowd took the unpleasant incident in stride. Absolutely nothing was going to deprive them of Mavado, Bounty Killer and Vybz Kartel, who had yet to touch the stage. The important thing is that no one got killed, but it became all the more clearer that heavy security at such a mammoth event is no guarantee that you will go home unscathed.

Anyway, that’s not even where the real disappointment lies. For most of the nearly 14-hour show, patrons who came for the high-wire entertainment and to witness a ‘clash’ or two had to endure a relentless onslaught of up-and-coming acts (they accounted for nearly 85 percent of the 120 performers on the night), whose dubious talents are far more suited for community concerts and sessions designed for showcasing wannabes. 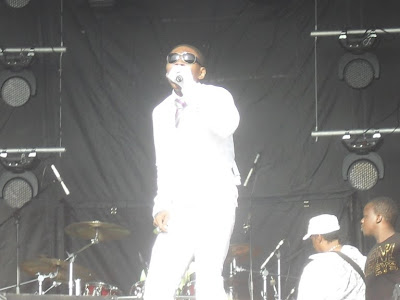 'WHITE' MAN: Vybz Kartel tried to please his fans with his barrage of Gaza tunes

After more than two decades, Supreme Promotions, the organizing outfit headed by Isaiah Laing, should be well aware of what their thousands of loyal patrons turn up each year expecting: the best of dancehall’s best. People want and deserve value for their hard-earned money. Not surprising, many of the wannabe acts didn’t stand a chance before the blood-hungry and impatient, sometimes boisterous crowd. The boos, jeers and claps echoed throughout the venue.


Not even the much-touted lyrical battle between Goofy (Mr. G) and L.A. Lewis materialized. Apparently, Lewis was a no-show. Dancehall heavyweights Bounty Killer, Mavado and Vybz Kartel, who closed the show, barely caused the ripple effect during their stints that the massive crowd yearned for. Also, there was nobody willing to take on Merciless, who pleaded in vain for a punching bag. 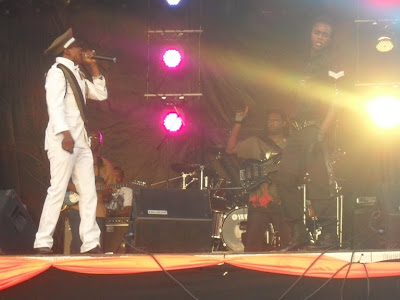 WAR OF WORDS: Kiprich (right) and General B renew their lyrical rivalry

Though lacking in genuine dancehall heat, a rare attention-worthy moment came with the unplanned clash between Kiprich and General B, who were going at it for the second year in a row. And, for the second year in a row, General B was soundly and repeatedly booed, while Kiprich stood tall after the 20 or so minutes. Chino (dapper and commanding), Lisa Hype (brazen and fearless), Assassin (reflective and lyrically sound), Flippa Mafia (cocky and extravagant), DJ Face (bold and battle-ready), Etana (started off well but ruined by a brief power outage), G-Whizz (concise but appealing) and Pamputtae (deliciously raunchy and entertaining) gave good accounts, but their efforts weren’t enough to turn the show into a compelling affair.

So while the show wasn’t a complete failure, this first-timer left disappointed. For a world-renowned event that has been held annually for more than a quarter-century, Sting’s organizers still have a thing or two to grasp about truly satisfying patrons. Yes, no show will ever be flaw-free, but at this stage in its existence, Sting should be at least living up to expectations – and topping it off with a few great surprises. And I don’t mean bullets and flying bottles.

Email ThisBlogThis!Share to TwitterShare to FacebookShare to Pinterest
Labels: CONCERT REVIEWS, MY (SOMETIMEZ) FAB LIFE, PIECEZ OF ME