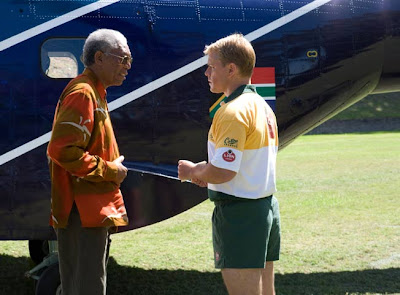 Delivered with distinctively regal exactness from director Clint Eastwood, Invictus may not be stirring enough for some moviegoers, but Matt Damon and Morgan Freeman, both recent Oscar nominees, inhabit their real-life characters with excellent conviction.

The film, with a screenplay from Andrew Peckham, tells the inspirational true story of how South African president Nelson Mandela (freeman) joined forces with the captain of South Africa’s underdog rugby team (the Springboks) Francois Pienaar (Damon), to help unite their country. Mandela, fresh from his lengthy prison sentence, knows his beloved country stays racially and economically divided in the wake of apartheid. But he strongly believes he can bring his people together through the universal language of sport. With that vision, the president rallies the Springboks as they make an unlikely run to the 1995 World Cup championship finals and restore pride, joy and unity to an ailing nation.

Eastwood's Invictus (from the Latin for 'unconquered') wisely does not seek to tell Mandela's life story, but pounces on his rarest qualities, thereby crafting a moving tribute to a truly great icon and humanitarian. Invictus is an undeniably powerful, if predictable, account of how Mandela turned the country’s rugby team into a unifying force for . Non-sports enthusiasts may find their patience tested occasionally, but Damon’s sincerity and Freeman’s grace carry the film.

Posted by TALLAWAH Magazine (tallawahmagazine@gmail.com) at 2:17 am