TALLAWAH closes off this leg of Actor Boy Watch with a look at the picks for the top four actresses of the past season. I know, it should be five, but I couldn't come up with a worthy fifth. Quite unfortunately, I missed too many productions last year. So, here goes: 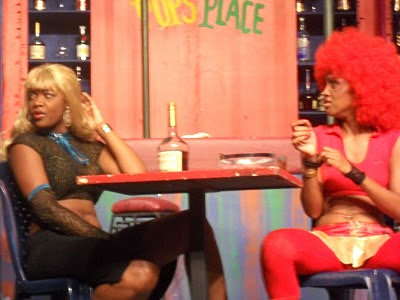 Bold and daring, gave a mesmerizing turn as an exotic dancer who faces tribulations in her personal and ‘professional’ lives; one of the most nuanced female performances of the year.

No stranger to robust and engaging acting, Harris was in her element as Marilyn, a driven career woman who finds herself heads over heels for a sexy young stud in Aston Cooke’s Me & Mi Chapsie.

Opposite an appealing Paul Issa, Nicholson, last year’s Best Actress winner, shone as a confident but vulnerable woman who corresponds with her childhood sweetheart via touching and revealing letters in the Brian Heap-directed Love Letters.

After a lengthy break from the stage, Reid returned in stunning form (alongside Dorothy Cunningham, Ronald Goshop and Tesfa Edwards) to star as a strong-willed wife whose husband strays after younger flesh in Dream Merchant.

NEXT TIME: The nominees are revealed (announcements are set for March 1), and the analysis begins. Wonderful days ahead, dear readers.