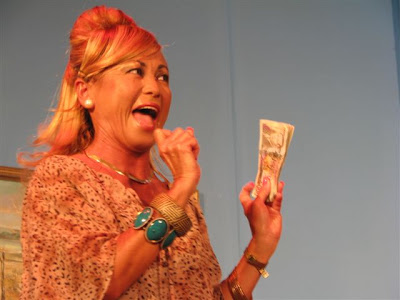 MONEY TALKS: Terri Salmon is a bonafide scene-stealer in For Better Or Worse.

This week, TALLAWAH continues the 2009-10 Actor Boy Watch special with a look at the category of Best Supporting Actress. Here are the top five most outstanding performances from supporting female actors I saw on the Jamaican stage in 2009-10.

The ever impressive Cunningham works her thrill and magic and a sturdy British accent for her turn as a scheming relative in Adrian Nelson’s Dream Merchant, giving a thoroughly proper lesson to her much younger co-stars.

Ruth HoShing, FOR BETTER OR WORSE

HoShing’s range and wise character choices as an award-winning actress is on full display fro her latest turn (in Basil Dawkins’ For Better Or Worse), as she fully sinks her teeth into the juicy part of Enid Shields, a successful boss who fixates on her young employee.

One of the indisputable joys of the latest JAMBIZ production is watching McDonald-Russell steal just about every scene she appears in. And whenever she’s offstage, you realise that you miss her. Credible, funny and memorable, her Princess is central to the core and spirit of Easy Street.

Terri Salmon, FOR BETTER OR WORSE

Having been away from the Jamaican stage since Concubine? Salmon returns strappingly as Patience in For Better Or Worse, indubitably standing out as the play’s strongest performer, remarkably efficient and reliable in her small but essential supporting role.