BOOK BUZZ: What should Bolt title his upcoming autobiography? 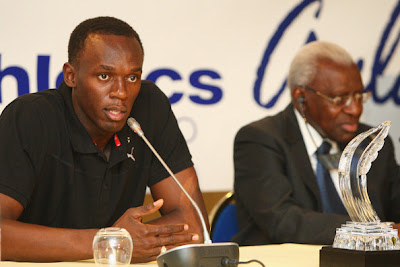 MAN OF TALENT: Usain Bolt, the World's Fastest Man, has announced that an autobiography is in the works. At right, is current IAAF President, Senegal's Lamine Diack (at a press conference in Monaco last November).

Usain Bolt, the ace sprinter. Usain Bolt, the ambassador. Usain Bolt, the author? Apparently, ‘Lightning’ Bolt is about to expand his résumé – again. According to Bolt’s management team, the track superstar has inked a two-book deal with publishing titan HarperSport. Word is an illustrated book about the athlete’s career and his Jamaican roots is due to be published this October.

The second release, an in-depth autobiography, will come out shortly after the 2012 London Olympics. In a posting on his agent's website, Bolt is quoted as saying, "I'm determined to give my fans all over the world a great insight into me and my life."

But, clearly, a professional writer will collaborate with Bolt on this tell-all autobiography because I don’t see the 23-year-old sprinter churning out his life story, with all the “great insight,” all by himself. At the same time, this one might sell some copies, provided that it delivers big time. He is, after all, a mega global brand with insane earning potential, and you have to give props to his relentless “marketing” team.

Anyway, I wonder what the intended title of the autobiography is. I want to refrain from offering suggestions, but let’s hope it’s nothing uninspired and cheesy like “Bolt: To Di Werl” "They Call Me Lightning." I'm just saying. More importantly, Mr. Bolt et al, today’s readers want real bang for their buck, so please bear that in mind when crafting this book. Translation: Don't skimp on the scandalous details.

Bolt, who is a member of the Order of (OJ), emerged as a bonafide superstar at the 2008 Beijing Olympics by winning gold medals and setting world records in the 100 and 200 metres and the 4 X 100 team relay. He also won gold medals in those events at last year's World Championships in , lowering his own marks in both the 100 and 200 sprints.

In the meantime, we await the official re-naming of Highway 2000 to the – if that's still going to happen. Maybe the government was just bluffing.

Your Thoughts: Do you have suggestions for Bolt's book title? I'd love to hear from you.