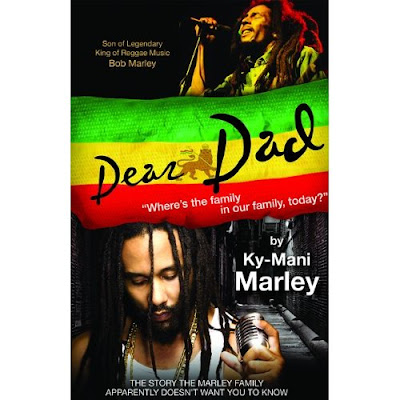 Ky-Mani Marley’s new tell-all memoir, Dear Dad: Where’s The Family In Our Family Today? is already a source of controversy. But apparently, Marley is the one who is pissed. In a very recent interview with the Miami Herald, Marley puts his publisher on blast for allegedly failing to honour the artiste’s wishes for certain “edits” to be made. What’s more, Marley complains that some of his words were “twisted.” He is also not pleased with the new book cover, and caption (‘The Story The Marley Family Apparently Doesn’t Want You To Know’). Interesting.

Ky-Mani told the publication how he really feels about the situation:

“As far as twisting my words, we went through the book initially, and we had edited it and had a first cover that we agreed upon using. After I brought it to my sister and speaking to her, I felt as though I wanted to make some edits. There were certain things I didn't have an understanding for, and she made it clear to me. At that time, I contacted [publisher] Mr. Farrah Gray and said there were just a few small edits I would like to make in the book. And he decided that he didn't want to make the edits, because what I wanted to change was very controversial and he felt as though that would be the selling point, or one of the selling points, of the book. I told him that I was not willing to participate in the promotion of the book unless I have these changes made. . . . He stopped taking my calls for a month or two.

`And I wake up one morning; I think it was Feb. 5, to see this new cover with the caption saying `the book the Marley family apparently doesn't want you to read.' And I was very taken aback by that, being that my family had already read the book. To be honest, I really don't know if he changed anything because I've been so disgruntled by it that I haven't even had a chance to read the new edit….. I'm able to move forward -- I've been fighting all my life, so this is not new to me. I'm in a place I'm used to.''

Dear Dad is Ky-Mani’s tell-it-like-it-is story of his strange relationship with the Marley clan, before and after the death of Bob. In the book, out this month, he talks about the shoddy treatment he received from his father’s side of the family for years and chronicles his survival in the gritty, drug-infested streets of the ghettoes to his ascent as a Grammy-nominated reggae star. If the reader reviews on Amazon are anything to go, this one might be worth picking up. In the meantime, word is Ky-Mani’s upcoming album is called Evolution of a Revolution.