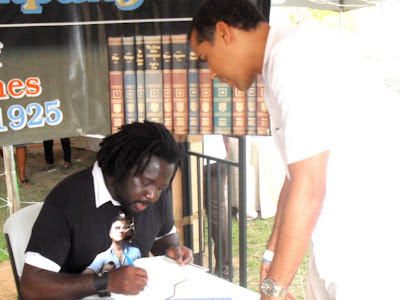 GOOD READ: Author Marlon James signs a copy of The Book of Night Women for Matthew at Calabash 2009 at Jake's in Treasure Beach, St. Elizabeth.

Jamaican-born fiction author Marlon James has been named among the finalists for the National Book Awards (one of the most prestigious literary awards in the United States) to be handed out on March 11. James, who is based in in the , was recognized for his acclaimed sophomore novel The Book of Night Women.

Winners in six distinct competitive categories will be announced March 11. There are no cash awards. Joyce Carol Oates, one of the few writers as prolific as Vollmann, will receive a lifetime achievement prize, and a special award for criticism will be presented to New Yorker dance critic Joan Acocella.

The National Book Critics Circle, founded in 1974, is an American non-profit organization with around 600 members, "book reviewers who are interested in honouring quality writing and communicating with one another about common concerns."