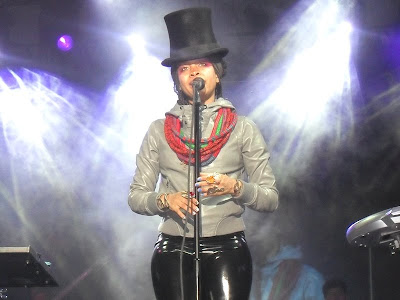 One of the implicit joys of live music is that you are in the moment with the performer. You share the peaks and valleys of the on-stage performance. What’s more, when seeing a performer live for the first time, first impressions are everything. So it was last Friday night when the incomparable Erykah Badu took to the mainstage at the 2010 Jamaica Jazz & Blues Festival at the Greenfield Stadium in , Trelawny. Judging from her deliberately paced entrance onto the mainstage alone, it was obvious that this performance would be nothing close to ordinary. Then again, Erykah Badu is no ordinary artist. Myth and mystery go hand in hand with Miss Badu.

The setting had everything for an extraordinary, maybe eccentric gig: figure-hugging black tights, grey sweater, red neck wrap and black magician’s hat. A smoky, artsy ambience. Vibrant, eclectic apparatus. Philosophical, spiritual opening (“Hip hop is bigger than religion”). Jazzy interludes. Soulfulness, sorrow, joy, hope, dance, disco, funk, energy, fire, passion, spirit. It was all I expected, plus the unexpected. With a woman as notorious as Erykah Badu, I came prepared for the unexpected.

During her nearly two-hour set, she repeatedly turned to what resembled a thermos from which she poured a strange liquid, which apparently gives her voice that extra oomph. And then there was the music, the hip shakes, the swagger, the eyes clear like crystal pools, skin remarkably gorgeous.

Ever since her smash debut Baduizm, Badu has been one of my faves. Her music has an ardour and maturity lacking in many of her contemporaries. During her incredibly soulful (occasionally bouncy and funky) performance Friday night, her alto vocals, which compellingly at times sound like a cross between Feist and Joni Mitchell, lent her music an emotional authority, especially during her rendition of cuts like the sugary “Love of My Life,” magical “Didn’t Cha Know” and the elegantly melodious “Next Lifetime.” 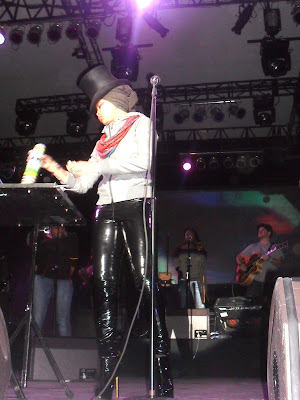 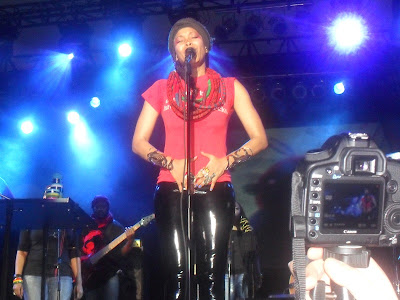 IN THE MOMENT: Badu digs deep during her set. Above: she turns to her trusty thermos for a sip of her mystery liquid.

Unapologetically unconventional, classic and insightful, Badu on the stage is simply fun to watch, completely captivating, rhythmic and every bit accessible. I couldn’t take my eyes off. (By the way, I was standing directly in front of her at the very front of the stage. She looked directly my way at least once. Sweet.)

From the insistent groove of “On and On” to the slamming soul-disco beats of several cuts from her multi-platinum records, Badu’s performance gradually evolved into the musical equivalent of a page-turner. I was even pleasantly surprised by the retro new wave groove of tracks like “Soldier” from New Amerykah: Part 1, her latest album.

And when it was over, patrons cheered, screamed and begged for more. After all, she hadn’t treated us to such gems as “Tyrone” or “Bad Lady.” Still, with her stint on stage – classic, cool and confident – Badu surpassed my expectations. “Thanks for allowing me to share my testimony with yall. This is therapy for me too,” she said at the end to her screaming fans, including one young lady who shouted at the top of her longs for the entire performance. “The world is going through labour pains. Things we can’t correct, the universe is correcting for us. It’s never too late to work on you.” You gotta love a sister who drops pearls of wisdom likes these on her audience.

While Erykah Badu’s music has been a bit too esoteric and obscure for some, she has always been notable in my books for her risks and fearlessness, which is especially evident on New Amerykah and its forthcoming sequel. What Badu will try next musically is anyone’s guess, but you get the sense that she’ll figure it out.