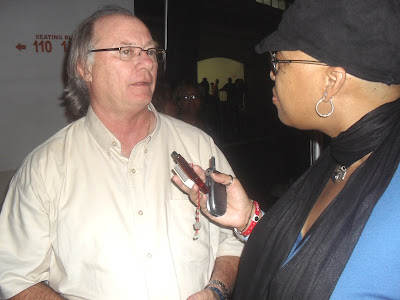 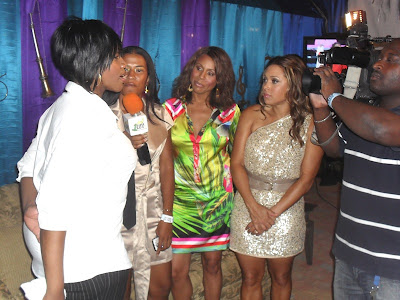 DYNAMIC DIVAS: The ladies of R&B group The Queen Project give interviews in the press room following their terrific performance at the 2010 Jamaica Jazz & Blues Festival.

Ah, the allure of the outdoor event. Ever wonder what the elements for a great, successful live outdoor concert are? A supreme balancing act between organization and execution and total patron satisfaction. More or less. More the most part, Jamaica Jazz & Blues 2010 had the requisite elements, pulling a mammoth throng nightly to its new home.

As always in the music biz, star power is what drives the most successful events, not just for charisma but their performances. Jamaica Jazz & Blues 2010 delivered plenty of that. From the wondrously layered performance from Babyface to the eccentric splendour of Erykah Badu to the serene passion of Gladys Knight, the concert series delivered on its promise of intriguing, entertaining performances.

The new venue, the Greenfield Stadium in , Trelawny, lent sufficient breathing space and ease to the flow of the event. The grounds were spectacularly outfitted with tents, gazebos, skybox lounges and a host of mini restaurants and display booths, showcasing everything from dazzling artwork and jewellery to mouth-watering culinary delights. Additionally, ascendant local talent seized the opportunity to show off their competence and skill on the talent stage. (Among those spotted doing their thing were Cameal Davis and Onaje Bell.)

Meanwhile, with ticket prices starting in the vicinity of US$85 (and we are still in the throes of an economic crisis), Jamaica Jazz & Blues was very well supported. Quite amazingly. My only complaint concerning the concert: Although organisers did their best to execute and run a show as tight as possible, the band changes between performers were extremely lengthy. But that’s nothing really when levelled against the sensation and sheer magnificence of performances from billed entertainers.

I hadn’t been to the Jazz & Blues festival since Jill Scott brought the house down two years ago. It was great to be back to soak up the musical opulence as well as bask in the majesty of the new venue and sizzling acts (including Billy Ocean, Erykah Badu, Babyface, Gladys Knight and The Queen Project), who were completely worth the price of admission. Thoroughly entertaining and eye-opening, Jazz & Blues 2010 scored a home-run.