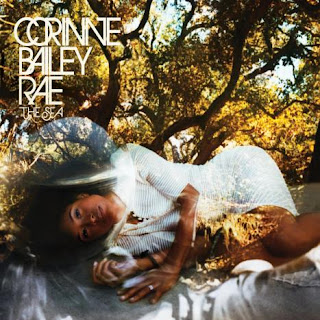 'RAE' OF LIGHT: The singer returns with her passions intact

Audiences were instantly captivated by Corinne Bailey Rae’s mix of rhythmic melodies, megawatt sweetness and girlish innocence when the British singer-songwriter introduced us to her sound with a stunning 2006 self-titled debut. Her smoky voice, soulful and expressive, immediately won comparisons to Billie Holliday and Norah Jones. Songs like “Trouble Sleeping,” “Like a Star” and the Record of the Year-nominated “Put Your Records On” highlighted the singer’s bluesy contralto and throaty vocals and earned her a place in the pantheon of emerging singer-songwriters who matter.

Then the unthinkable happened: Bailey Rae’s beloved husband (saxophonist Jason Rae, 31) was found dead in a apartment, in March 2008, reportedly the victim of a drug overdose. Understandably, the fragile singer descended into a deep depression that threatened to keep her permanently hidden from her global fans. Two years later, evidence suggests that Bailey Rae is still reeling from the tragedy, but like the consummate entertainer she has poured the emotions into her art. The result is The Sea (Capitol Records), a compelling sophomore recording that is sure to please her longtime loyalists and woo new followers.

Once again, Bailey Rae’s music feels effortless in the sense that her lyrics are often conversational and on the surface appear to discuss relationship matters. But, not surprisingly, the bulk of the eleven tracks on The Sea are informed by loss, grief and sorrow, though themes of hope and beauty occasionally shine through. And it is this sort of expression of vulnerability that still connects with fans.

The finest of the tracks here include the heartbreakingly beautiful “I’d Do It All Again,” which has the power to bring even the toughest cynic to tears. Then there’s the plaintive “Are You Here” and the endlessly moving “Love’s On Its Way.” She sings about falling hard for a lover on “Closer”; on the upbeat, rock-guitar-flavoured “The Blackest Lily” she continues her passion study (I was a creature of appetites/And we played a game that you didn’t like/There was nothing that I could do) while on the jazz-inflected “Paris Nights/New York Mornings” she addresses the joy attendant to the perfect fantasy romance.

With superbly executed arrangements from longtime production collaborators Steve Brown and Steve Chrisanthou and a new band of British-based musicians, Corinne Bailey Rae’s The Sea is at once haunting and melodiously smooth and stunning. There’s growth here, hope, joy, confession and beauty, but there are also traces of a broken heart. Magical, innocent and tender, as always, Corinne Bailey Rae deserves your undivided attention.

BEST TRACKS: “Diving For Hearts,” “Closer” and “I’d Do It All Again”