PIECES OF ME: Turning 25: A Quarter-Life Crisis?! 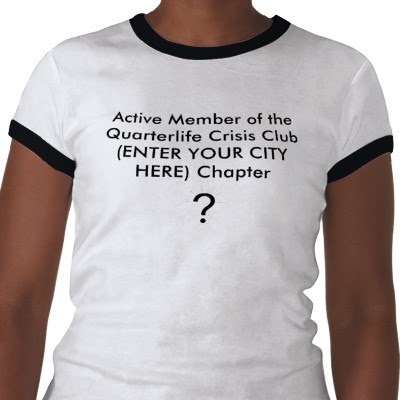 On February 3, I hit the big 2-5. According to the experts, I have officially entered adulthood. (Cue the marching band!) Growing up, arriving at the quarter-century mark always seemed like an eternity away; a milestone that would be marked by unparalleled joy, celebration and an incredible sense of achievement. The reality, I fear, has not been so rosy. In fact, recently turning 25 has only served to reinforce the notion that entering adulthood is one of the most cumbersome though partially enlightening experiences one is bound to face in life.

Still, I can’t help but feel like I’ve accomplished something as major as copping a top prize that puts a smile on my grandmother’s face. But there is a range of unsettling emotions I’ve encountered over the past two weeks that are hard to explain. And I’m not referring to my legendary mood swings. Probably just nerves about getting older and being only five years away from 30. (Sometime last year, I swear I spotted two greys growing close to my forehead. The horror. They’ve since disappeared).

More than ever, these days I worry about fulfilling my dream of publishing close to a dozen books and globe-trotting at a rate that would put George Clooney’s Up In The Air character to shame. I am wracked by guilt that I have not yet read for a second degree or saved as much in my bank account as I promised myself I would.

In today’s world, obsessed with fame, success, dollars and cents, what should have I accomplished by age 25? The basics, I suppose, including solid secondary and college education and some amount of financial independence. In my case, though, there’s also the harsh truth that you can’t truly rely on a soul but yourself.

And then there are some important life lessons: It is wise to cherish and make maximum use of your gifts (I don’t exercise my terrific vocal chords as often as I should); achieving true success involves considerable hard work, commitment and sacrifice. I have always prized my youthful appearance, vigour, drive and vast reservoir of energy. And while I don’t sense those dwindling, I can’t help but wonder how long I’ll be able to hold on to them.

Such niggling concerns, according to life experts, rank among the symptoms of ‘the quarter-life crisis’ (not to be confused with ‘the mid-life crisis!’). These professionals argue that nearly all twentysomethings face ‘the quarter-life crisis’ as part of the process of entering full-blown adulthood. Oh dear. And what are the two principal symptoms? Frustration with relationships, jobs and the real world AND insecurity about everything. Oh, that’s so me. At times I do feel as if I am insecure about everything, from my physique and my health to my finances and career choices.

Since my days as a high school standout, I have always been more fearful than confident, more brooding and pensive than joyous and optimistic. Not much has changed. I have very high standards. I demand excellence. More than once I have even been accused of perfectionism. I worry when things don’t seem to be going how I desired and anticipated.

Am I expecting too much out of life, too soon? I don’t think so. But, according to the experts (again), young adults who identify with symptoms of ‘the quarter-life crisis’ should (a) Lower expectations and/or (b) Give up the indecision and go after your goals. I am more of a dream chaser. Always have been, and, I can safely say, will always be. I am motivated by fear, driven by my passions. That’s one constant I hope remains.

In any case, I am fully cognizant that, at 25, I’m still on a journey of self-discovery. Many of us are. Several persons who read my work say they are surprised that I am “so young.” Touching. They make me feel like I can really do it all. Sometimes I wish I shared their sort of confidence. But I know I’ll get there. Someday.

Did you freak out about turning 25? How did you cope with your ‘quarter-life crisis’? How do you feel now when you look back? As always, I’d love to hear from you, dear readers.

Email ThisBlogThis!Share to TwitterShare to FacebookShare to Pinterest
Labels: MY (SOMETIMEZ) FAB LIFE, PIECEZ OF ME