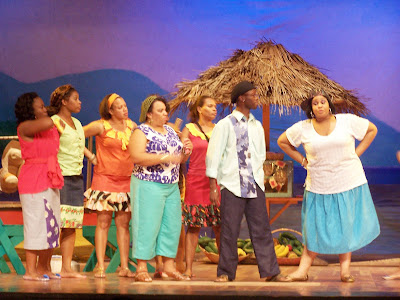 BY THE SEA: Disgruntled residents express their grievance in this scene from Pirate Jack.

Pirate Jack, the 2009-10 LTM Pantomime, is at its best when the stage serves as a showcase for the magnificent, colourful set design, costumes, lighting and inventive props. Technical poignancy has always been a hallmark of the annual musical production. But, this season, when the focus is on the eerily familiar story and the acting performances, there is not much to thoroughly hold your attention.

The residents of Sea Grape Fishing Beach are concerned about the rapidly dwindling fish available to sustain their livelihood. As a result of the poor catch, business is suffering. On the advice of businessman Mr. Harry Seaside (Kevin Halstead) they decide to venture out to the treacherous to try their luck.

Meanwhile, buccaneer Pirate Jack is also down on his luck, and along with his disgruntled crew, eccentric daughter (Toni-Ann Fraser), busybody mother-in-law (Faith Bucknor) and loyal wife (Doreen King), he also sets out for . The fates of the Sea Grape residents, Pirate Jack and his crew becomes laced together as the production heads to its startling conclusion.

Helmed once again by veteran director Robert ‘Bobby’ Clarke, highlights include the engaging movement and the frequently ear-pleasing numbers, as well as a few standouts in the large cast of veterans and up-and-comers. However, Barbara Gloudon’s script lacks freshness, and there’s simply not enough juicy joy in the dialogue and lyrics as in previous years.

Pirate Jack looks great (glossy and well-lit) on the surface (thanks to the combination of set, lighting and costuming), but beneath the façade, there’s not much substance to hold it all together.