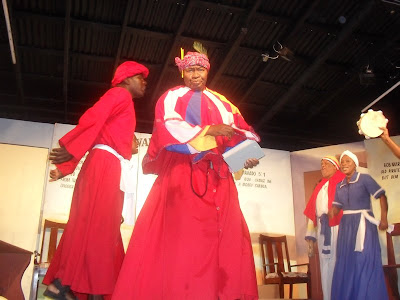 It’s been a while since I’ve seen one of those truly boggling theatrical offerings, one of those productions made by a team unmistakably blinded with ego and overreach.

Writer Paul O. Beale and director Michael Nicholson have followed up their previous popular comedies with Serious Business, a dim-witted play underscoring greed, corruption and religion, while laced with fodder to educe intermittent laughter and occasional moments of intensity. But in the end, the play really amounts to a lot of hirsute nothings.

Hugely surprising since Stages Productions has in the past often given us hilarious treats such as the winsomely rascally Di Driver and the original Bashment Granny. In Serious Business, however, the comedic antics of crowd-pleasing star Keith ‘Shebada’ Ramsey accounts for much of the little entertainment available, but it’s not enough to elevate this underwhelming project. 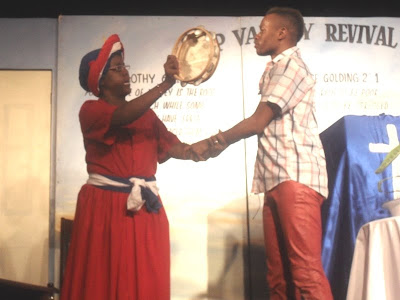 Maxwell Grant is the criminally corrupt pastor of Deep Valley Revival Church, and he governs his congregation with an iron fist, while engaging in extortion, infidelity and profanity, much to the distress of his longsuffering wife Sonia (Deon Silvera) and church elder (Volier Johnson). A new minister (Ramsey) arrives to turn things around, but, as the saying goes, the more things change, the more they remain the same. Chaos, conflict and a bizarre sequence of events ensue as each character tries to secure his best interest.

Sadly, Beale (the creator of the clever and witty roots classic Granny Rule) tries to tackle too way much in his script, and the low-rent performances make the shortcomings all the more apparent. The best shots come from Ramsey and Silvera, but she embodies the wife with way too much syrupiness and tolerance to make her wholly interesting.

But the gross mistreatment of religion and Christian ideology in the play is the real violation here. Overall, Serious Business scores a few laughs but lacks the requisite intelligence and wit to it make it even remotely compelling. Loose screws rattle throughout and the wheels fall off the storyline long before the play reaches its cliché-riddled finish.