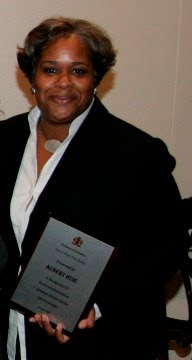 CLASS ACT: Above, the late Albert Huie. Christine Huie accepts a plaque on behalf of her father in Washington DC in October 2009.

Celebrated Jamaican fine artist Albert Huie, known for such seminal works as Crop Time, is dead. Huie recently passed away at his home in after a long illness. He was 89.

Prime Minister Bruce Golding has described Huie as a cultural icon who has made an immense contribution to the development of Jamaican art. In a statement from , where he was on an official visit, Golding extolled Mr. Huie as one of ’s greatest impressionist painters whose use of light and colour rendered so many of his works as masterpieces.

“His love and study of nature enabled him to capture the beauty of ’s landscape in countless depictions. His amazing portraits continue to be sought after by art collectors and curators. owes much to this gifted artist whose work will forever remain a part of our artistic treasures,” Golding said.

The Prime Minister has also extended condolences to Mr. Huie’s widow, Phyllis, daughters Evelyn, Alicia and Christine and other members of his family. Huie, dubbed a master painter, was also nicknamed The Father of Jamaican Painting.

For more on the life and work of the late Albert Huie, visit Huiestudios.com

Posted by TALLAWAH Magazine (tallawahmagazine@gmail.com) at 1:50 am