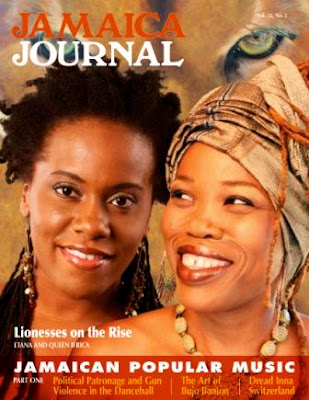 For the first time in its illustrious history, the team behind the Jamaica Journal have put together a special music issue in acknowledgement of the country’s rich musical history and positive attributes of reggae and dancehall, while also shining a light on the areas that desperately need improvement and a clean-up. Props for putting Queen Ifrica and Etana on the cover. Good move.

The latest issue of the journal (Volume 32, No. 3) was launched on Sunday, February 28. And apparently, the idea for an inaugural music issue was first pitched by former prime minister and unabashed reggae lover, Edward Seaga, who appeared on the cover of the magazine’s previous issue, and who recently launched the second instalment of his must-read autobiography.


“Lionesses On The Rise (Etana and Ifrica),” is among the key articles in the journal, celebrating the work of these two conscious female artistes, who have kept their message encouraging and are the “new prototype of the Rastafari-inspired woman-liberated, articulate, strong yet charming…and most importantly commanding attention.” On the flip side, Dennis Howard in his article, “Political Patronage and Gun Violence in the Dancehall,” examines politics and violence in our music. The issue also features tributes to Trevor Rhone and Wayne Brown, who have made immense contributions to the arts in and the .

Speaking at the launch, culture minister Olivia ‘Babsy’ Grande emphasized the importance of the publication saying the move is a growing recognition of the importance and contribution of ’s popular music. The magazine launch also featured the official hand-over of the Dermot Hussey Collection, which spans over 30 years, to the . Hussey said his decision to make the donation was based on issues relating to “preservation and continuity.” Herbie Miller, the director/curator of the museum encouraged others to make their contributions to the museum and the preservation of ’s music history.


The Jamaica Journal, the flagship publication of the Institute of Jamaica (IOJ) and the ’s leading cultural publication, was first published in 1967, as a quarterly authoritative source on Jamaican heritage, contemporary culture and natural environment, the Jamaica Journal’s coverage of a wide range of topics.