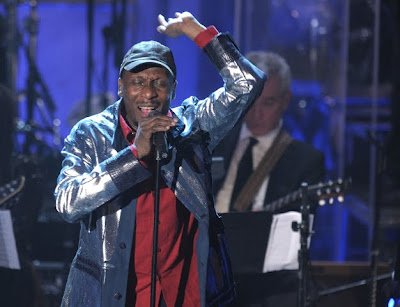 I AM LEGEND: Jimmy Cliff performs his hits at the 25th Annual Rock & Roll Hall of Fame induction ceremony in New York.

It’s official. Jimmy Cliff has become the second Jamaican (Bob was the first, naturally) to become a member of the prestigious Rock and Roll Hall of Fame. It’s about darn time. The reggae legend took part in the induction ceremony at the swanky Waldorf-Astoria Hotel in on Monday.

Haitian-American music star Wyclef Jean, who referred to himself as “a young Jimmy,” was given the royal honour of inducting Cliff, born James Chambers. Cliff is also a member of the national Order of Merit (OM), Jamaica's third highest honour.

Ever grateful for the accolades, Cliff, 61, expressed gratitude to the Hall of Fame for the monumental recognition, describing it as a step to “higher heights.” Cliff also performed a handful of his hits for the industry crowd, including the timeless classics “ to Cross” and “The Harder They Come.”