AT THE MOVIES: Robin Hood + Shrek Forever After 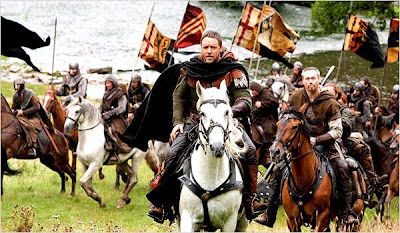 Ridley Scott and Russell Crowe’s latest collaboration, Robin Hood, earns comparisons to their Oscar-winning triumph Gladiator for its captivating themes of war and vengeance and retribution motif, but Robin Hood is tripped up by its inconsistency and lack of outlaw charm. Despite magnetic performances from Crowe and fellow Aussie Cate Blanchett (as the iron-willed Marian) and lush battle scenes, the film ultimately fails to achieve what Gladiator accomplished. Lore posits Robin Hood as the beloved bandit from who takes from the rich and gives to the poor, but in Scott’s film, he’s Robin Longstride, a member of the British army returning from war, only to become persona non grata when the ruthless young king Richard The Lionheart assumes the throne. As it turns out, this Robin Hood is one of those “origin” stories that, unfortunately, most cinema audiences don’t eagerly lap up. The film is occasionally majestic and epic in reach, but it doesn’t help much that what we eventually get is a lengthy, lengthy backstory. Tyrone’s Verdict: B- 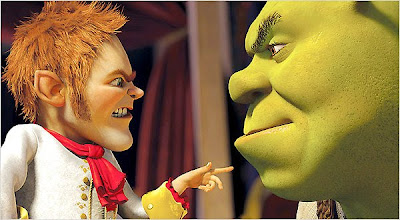 IS IT OGRE YET?

In the latest entry in the box office animated series, Shrek (Mike Meyers) is no longer the ferocious, despised ogre that villagers in Far, Far Away are terrified of. Instead, the large green one has become somewhat of a celebrity adored by his public, including both grown-ups and kids who request his famous roar ad nauseam. But it’s all become a little overwhelming for Shrek, to say the least. Add his dreary and mundane domestic existence to the equation, and Shrek wants out – immediately. He (foolishly) strikes a deal with the malevolent Rumpelstiltskin, only to be thrown into a life-altering whirlspin when he realizes he’s been double-crossed. Reprising their roles, Cameron Diaz (Fiona), Antonio Banderas (Puss) and Eddie Murphy (Donkey), join Meyers on a frequently fun, modestly diverting quest in Shrek: The Final Chapter. But though it’s entertaining, this latest Shrek is still not as enjoyable as the previous entries in the franchise. Tyrone’s Verdict: C+