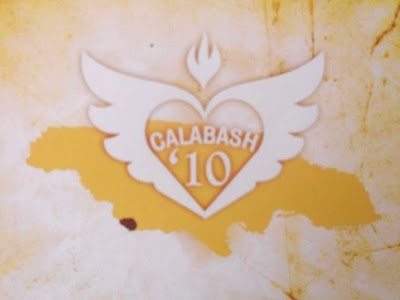 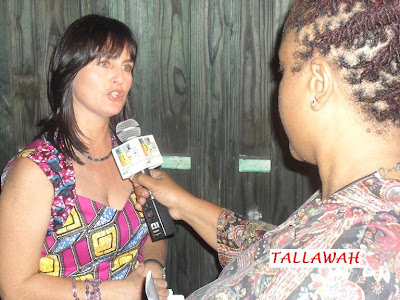 LIT CHAT: Calabash producer Justine Henzell talks with the media at the launch of Calabash 2010 at the Red Bones Blues Cafe recently.

It’s all systems go for Calabash 2010, and these days I am gearing up to rekindle my love affair with the magnificent annual joyfest and its breathtaking home of Jake's in Treasure Beach, St. Bess. This year marks the 10th anniversary of the international literary festival, so, yes, I am sharing the 10 random things about the Calabash experience that I look forward to annually – but moreso this year:

As they say in real estate, it’s all about location, location, location. The beauty and magic of Jake’s in (crashing waves, panoramic view, gentle breezes) set the perfect atmosphere for the sort of festival that is Calabash.

Each year, I marvel at the length of the bathroom line, which I am in the process of proving to be the longest in the English-speaking .

Year after year, attendees are fortunate to feast on the word from a stellar line-up of novelists and poets. No exception this year, evidently, what with Nobel Prize winner Wole Soyinka headlining the 10th anniversary festivities.

I hardly ever get to stay back for the late-night-into-early-morning live music, but from what I’ve heard, the invited entertainers throw down each year. Etana and Freddie McGregor are on the bill, so you know the sing-along will be heard from as far away as Mandeville this year.

The drive from Kingston down to Treasure Beach has got to be one of the most relaxing, reflective trips ever. Nothing beats a long drive-out to the country.

You never know who will show up; who you’ll spot. I call it famous faces in the crowd. New Calabash virgins pop up every year.

The food. Hmmmm. (Very) expensive, but worth the cost (most of the time).

I always get a good laugh during the open mic sessions. And I am certain I am not the only one. One year (2008, I think) I saw Mervyn Morris frown during an open-mic performance. Twice. I believe the young lady on stage kept repeating a line that goes something like, "Stampede over yuh body, gal. Stampede over yuh body."

Packed with shelves and shelves of “reasonably priced” titles from Calabash readers and general authors, the bookshop at Jake's is one spot to which I must make at least two trips on Calabash Saturday.

It’s the tenth anniversary in 2010. Duh. Who would want to miss that? Rain or shine, the show must go on!

Posted by TALLAWAH Magazine (tallawahmagazine@gmail.com) at 1:04 am