AT THE MOVIES: "Karate Kid" remake satisfies + "Sex and the City 2" sucks 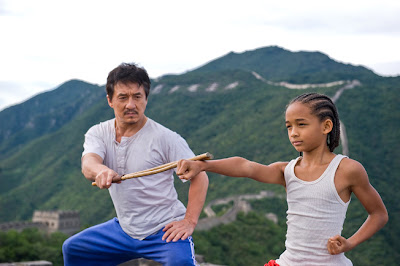 KUNG-FU FIGHTING: Jackie Chan and Jaden Smith in the new update of The Karate Kid.

It’s now safe to draw the conclusion that Jaden Smith is a rising star. Working opposite veteran action hero Jackie Chan in the new update of The Karate Kid the young actor (offspring of super-couple Will and Jada) charmingly arrests the spotlight, making his character both likable and appealing. His performance, heavily marked by fighting off bullies, training for a kung-fu tournament and romancing a pretty young thing, is a delight to watch as the young lead manages to convincingly strike the right balance between smart-mouth kid and burgeoning heartbreaker.

Directed by Harald Zwart with a screenplay by Chris Murphey, The Karate Kid is a delightfully engaging reimagining of the 1984 original that transcends its inevitable clichés and predictability. It’s super-fun and entertaining. It’s story poignant and emotionally involving.

Smith stars as 12-year-old Dre Parker, a sweet, good-natured kid who loves his life in . Now, he finds himself in due to a new career move by his hard-working single mother (Taraji P. Henson). Dre immediately finds the cultural differences difficult to navigate, but he soon befriends and falls for a beautiful classmate who plays the violin. However, their stark differences complicate their friendship.

Worse, Dre's closeness with the girl makes an enemy of the kung-fu-trained class bully, Cheng, who mercilessly picks on Dre. A stranger in a strange land with no friends, Dre has nobody to turn to but the quiet maintenance man Mr. Han, who is secretly a martial arts master. Han teaches Dre that kung fu is not about punches and anger, but maturity and engendering peace, and before long the boy realizes that standing up for himself will be the fight of his life.

Zwart, who has worked with young leads for such previous flicks as Agent Cody Banks, manouevres many pitfalls attendant to formulaic remakes while eliciting a superb turn from Smith and ratcheting up the chemistry between Jackie Chan and Smith – martial arts mentor and student – that feels both easy and remarkable. Chan, though, surrenders most of the spotlight to his young co-star, who admirably succeeds in scaling the lofty expectations that come with being the scion of the world’s biggest box-office draw, Will Smith. Overall, it’s a crowd-pleasing affair with heart and courage that will touch even the most strident skeptic.

In short, this new Karate Kid might lack the freshness and surprises of the original (a classic by many standards), but it delivers a solidly satisfying and entertaining two hours – and a splendid showcase for young Mr. Smith.

THE THRILL IS GONE: And now, ladies and gentlemen, a word on SEX AND THE CITY 2

When did Carrie, Samantha, Miranda and Charlotte become such silly, empty-headed nags? Has it been that long? (Michael Patrick King, you have a lotta explaining to do). I have to concur with the general consensus on the sequel to the hit 2008 movie Sex and the City: the thrill has absolutely vanished. I have never been so disappointed (and pissed) in my young life. The movie sucks. And I am a diehard SATC loyalist. Surely there is a third movie being plotted as you read this because that disappointing, mindless drivel – the worst reviewed movie of the year – cannot be the final memory of the beloved cult classic that we take to our graves. I’ll be waiting. 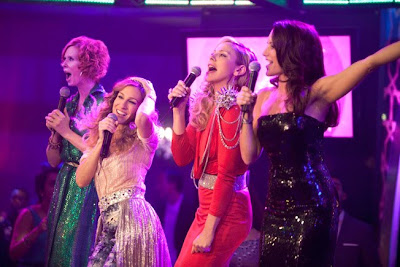 CRAZY IN ABU DHABI: The ladies of Sex and the City 2 in one of the film's most cringe-worthy scenes.

* At The Movies: Iron Man 2 – Nothing spectacular, but more sizzle than fizzle

* At The Movies: Robin Hood + Shrek Forever After