Attention, please! USAIN BOLT wants you to read his book 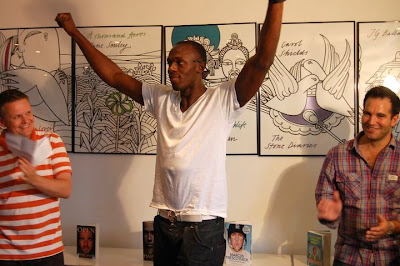 I’M THE KING OF THE WORLD: The Jamaican speed king celebrates good news about his upcoming book with staffers at HarperCollins in earlier this week.

Do you have space on your coffee table? Usain Bolt the author is set to release his “first official book” this fall, so naturally he wants you to buy it. The World’s Fastest Man took to his Facebook page yesterday to update fans about his burgeoning literary career. His message: (“Dear fans, My first official book, 9.58 - My Story, will be ready in September 2010. Watch this space for more. Published by Harper ”).

Straight to the point. Love it.

My checks have revealed that the United Kingdom-based HarperSport (imprint) and HarperNon-Fiction (division), which fall under mega-publishers HaperCollins, have set September 2 as the official publication date in the and November 1 in for the 288-page hardcover. For those interested in owning a copy of Mr. Bolt’s autobiographical account of his life so far, the prices being thrown around are £23 and $43.95 (Canadian).

In the meantime, here’s how HarperCollins describes the book:

9.58 is Usain Bolt's story so far, in his own words, beautifully illustrated with dozens of specially commissioned photographs. It’s about a skinny kid from the parish of Trelawny, where they harvest the best yams in the world. It's about growing up playing cricket and football in the warm Jamaican sun, then discovering that he could run fast, very fast. It's about family, friends and the laid-back Jamaican culture. It's about Auntie Lillian's pork and dumplings and Dad's grocery store in the sleepy . It's about what makes him tick, where he gets his motivation and where he takes his inspiration. It's about the highs and the lows, the dedication and sacrifices required to get to the top. It's about fast food, partying, dancehall music, fast cars and that lightning bolt pose. It's about radiating sport's biggest smile. This is the story of the fastest man on the planet.

Fascinating. Yam, pork and dumplings always make for a great read! This one has bestseller written all over it!

I WANT TO HEAR FROM YOU: Are you psyched to read Bolt’s account of his life so far? Do you plan to purchase a copy? To express your views on this article and to read other comments, follow the link to TALLAWAH . 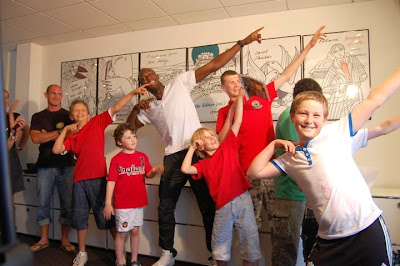 TO THE FLIPPIN’ RERL: Bolt and some young fans throw up his signature sign at HarperCollins in .

* Book Buzz: What should Bolt title his upcoming autobiography?

* The Hotness: ESSENCE thinks Bolt is it

Posted by TALLAWAH Magazine (tallawahmagazine@gmail.com) at 10:43 am